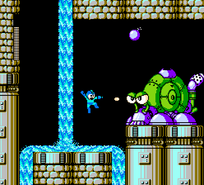 
​
+
Good level and enemy variation
large mini-bosses
chargeable buster
you can replay beaten levels
hidden items (in level detours)
you can finally pause while mega man’s bullets are on screen (except during the bright man weapon’s time effect or during the toad man weapon’s acid rain; pausing cancels the projectile), batman wire, nice "get weapon" screen (still unskippable though), great intro, some good bosses (pharaoh man, drill man (except when he gets a bad pattern), ring man; the fortress bosses), improved pause menu

+/-
More spikes and pits
detours with special items (sometimes slows the pace down (some of them lead to dead ends such as the one in bright man’s stage) but it can be fun trying to find them all and getting the e-tanks)
no ammo tanks
no ammo refill until you use a continue
easier bosses overall
no pause trick (mega man doesn’t respawn after pausing like before), enemies respawn off screen, e-tanks respawn after using a continue (so you can keep collecting them in any stage that has one)

-
​Some trial & error (some cheap hits (transition into spikes on dive man’s stage, sometimes odd hit detection on the moving platforms in bright man’s stage), you need to save a certain weapon for one unknown occasion or you are screwed (=have to use a continue; pharaoh shot for final boss))
some slowdown (less than in 3 and probably 2 as well)
some poor bosses (bright man, toad man, dust man)
slower paced (due to some tedious segments, an autoscrolling level, some empty rooms (bright man, skull man), detours and sometimes several mini-bosses in a row (ring man), slower boss intros (where their health fills up))
rehashes (enemies, level themes and weapons (bright = flash))
​overpowered weapons (pharaoh shot, toad rain, flash stopper), nerfed rush jet movement, some sloppy hit detection (bigger sprites, spikes), pausing while on a ladder still makes you lose your grip, uneven difficulty curve (final stages are pretty easy), you’ll sometimes get stuff like E-Tanks from friendly robots without having done anything special (other times you need to take a detour which is more rewarding), redundant paths in some rooms, no difficulty options