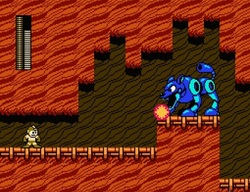 
+
Good bosses overall (heat man, metal man, crash man and bubble man are pretty easy on "difficult" and most of them are on normal difficulty)
great art direction
great variation
quite fast paced
password save
energy tanks (you can hold 4 at a time), nice intro, difficulty options (normal or difficult - JP version only has difficult), nearly all weapons are useful (Heat is a bit redundant while Flash and Air only have 1-2 specific uses), large mini-bosses in some stages (wood man and bubble man, Wily's fortress), some alternate paths (leading to goodies, usually a trial & error thing), energy tanks, slower fall speed when moving off a ledge

+/-
You can skip parts using the various items (usually you need to know the level layout to do so)
no ammo tanks
no ammo refill until you use a continue
very easy to grind for power ups (still easy on difficult mode) until later on
enemies respawn off screen
​you can only carry four e-tanks at once, fairly long knockback

-
Trial & error (choosing the correct path to get goodies (quick man’s and flash man’s stages, at one part in Wily's fortress you can miss 2 lives and 2 e-tanks, a few leaps of faith, disappearing blocks segment in heat man's stage, invisible floor traps in Wily's fortress (bubble shot needed), you need to save certain weapons (bubble shot and crash bomb) for unknown occasions in the final levels or you are screwed (=need to use a continue so that you’ll get an ammo refill which often sets you back quite a bit), boss patterns, Quick Man stage)
some minor control issues (mega man slides a bit when releasing the button after walking, small delay on movement when turning around while walking (minuscule if you are shooting at the same time), picky hit detection when jumping outwards/upwards from below platform edges)
some slowdown & flicker (turret fight, various segments)
you can't replay beaten levels (you need certain weapons to reach some items forcing you to play them in a certain order if you want to get everything)
getting a game over makes you lose your e-tanks (tedious to have to use a password if it happens
​there are also a few cheap hits if you don't have the right weapon (crash man’s stage); could be done in MM1), you can't pause while mega man's bullets or items are on screen (used as a proper challenge but only once), pausing and unpausing when climbing a ladder makes mega man loose his grip (he does a 'teleport in' animation which can also be used to your advantage at one point as you are invincible while it lasts), most boss fights can be won easily by using the right weapon and button mashing, some empty rooms (crash man, metal man, wily's fortress), the items (climber, rocket, platform) are given after specific levels instead of based on how many levels you've beaten (goes against the open ended design and can make you miss stuff), some difficulty spikes (quick man, wood man, wily 4 boss, heat man’s stage without item 2) and dips (bubble man, most parts where you’re using the right weapon/item), Wily is a pushover with metal blades on Normal, somewhat sloppy hit detection on Wily’s second form, slow and unskippable "get weapon" screen, some annoying sfx (menu sounds, HP fill sound),