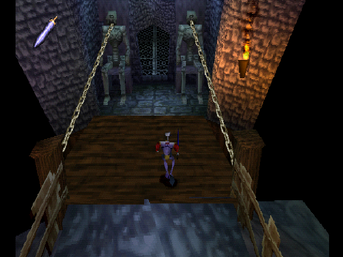 
​
+
Shops (consumable weapons, temporary sword upgrades)
Hub map (see SMW, some branching paths where you can do one of two levels in either order and sometimes you'll backtrack to use a key-type item in a previously beaten level to explore further into it)
Some choice in which reward to get first in the hall of heroes (trial & error though)
Memorable and well produced Danny Elfman-like OST
Walk or run while blocking
Analog support
Can replay beaten levels (only collecting the chalice is saved though - items respawn, puzzles reset and doors relock), unlock new parts of previous levels by beating bosses later in the game (somewhat confusing how you don't return to the graveyard to open the skull gate though - instead you enter a new level called "return to the graveyard" which ties into the previous level and can only open the gate from there, optional items behind breakable walls)
Some aim assist for ranged weapons (a targeting light shows what you're aiming at and you can switch targets manually as long as the other enemies are in range)
Upgradeable lifebar via the life bottles (they can be refilled at health restoration points although these eventually run out)
Pretty nice cutscenes and art direction (on the artwork and cutscenes plus some backgrounds and larger sprites)
Decent voice acting (the script is a bit Terry Pratchett-like in tone, talking protagonist although he doesn't say much and sometimes repeats lines), frequent checkpoints but you need to have one or more life bottles (1-ups), circular charge attack (see Zelda 3), two alternate sword attacks (but no combos?), many hidden items, pretty good bosses overall (three phases for the final battle), minor puzzles in some levels (easy overall, some of the riddles in the garden are decent and so is the optional puzzle in the castle ruins and the reflection puzzle in the final level), temporary smart bomb-like AI ally attack (the dragon spirit; released immediately as you open certain chests though rather than letting you use it when you want to), some memorable locations (sleeping village, the castle ruins, the ghost ship, whirlpool), some nice visuals touches (tracks on the ground when moving around which are more clear when landing from a jump, decent weather and lighting effects in some parts - the latter is a bit inconsistent though), can tackle some enemies into pits/water, one transformation of sorts (equip the dragon armor to move through hot areas - this also replaces your gear with a flamespitting dragon head), some interesting enemies (the skeleton pirates who'll be desummoned if you kill their officers, fight as a supportive mage alongside cpu allies for the first part of the final battle), some good humour (the hero while seemingly remembered as one by the surviving is basically a nobody who died first in the battle vs. the villain and is mocked by the real heroes' ghosts throughout on his journey to prove himself, can throw your own arm at enemies as a last resort, can turn some enemies into chicken which can then be eaten to restore some health), pretty good variety overall, shows you in which levels you've collected the chalice on the map screen (similar to SMW), two endings (collect all chalices for the good one)

+/-
Save between levels (three slots per game/card)
Need to use an analog controller to use a button to run (double tap otherwise) and to switch between toggle and auto-run
Collectathon/killathon elements (collect keys to progress, kill enemies to make an optional and hidden "chalice of souls" item appear - grants access to the hall of heroes where you can get extra rewards (weapons - while optional the game is noticeably harder without them, gold, life bottles))
Some gear deteriorates when used (shields and clubs)
Borrows some stuff from Mario 64 and Zelda 3 (boulder segment, torch puzzle)
Can't save health potions/vials for later use
Can't quickly exit beaten levels nor exit new levels via their entrances
Can't aim at flying enemies while they're outside of the area you can move within in a level
Can't burn down the haystacks in the field level (only set them on fire temporarily)
Three control settings rather than a full control config
Written hints placed here and there in the levels (as opposed to visual/audio clues though there are also NPCs who sometimes give you hints), can't restore lightning ammo except via an exploit (making an imp steal it from you and then buying it back), several weapons become obsolete in the mid-late game, Zarok makes a short appearance in a level early on but after that he hides in his base for the rest of the game which is a bit of a shame,

-
No level maps (makes the ant's nest segment a bit tedious)
Some control and interface issues (can't rotate the camera while moving, can't rotate the camera nor stand still and look around for seemingly no reason in various segments (annoying in tight corridors), slow block pushing (but not crates) and health restoration at restoration points, somewhat slow camera rotation, can only skip dialogue on a per sentence/message box basis (not speed it up), strafing is a bit odd - can't move backward or forward while doing it (holding strafe and moving backwards makes you start walking backwards instead of strafing and then you have to re-press the button to strafe), can't map alternate weapons to the alternate or main attack button nor a button combo - have to equip one weapon at a time via the select menu and sometimes a weapon's only attack is mapped in an awkward way considering what blocking is initially mapped to (x to attack/y to block), can't rotate the camera vertically/on the y axis, can't access the inventory menu if you're not standing still (attacking doesn't count though), the game is overly picky about your positioning when interacting with some objects and NPCs, have to go into the menu to use keys on locked doors, can only hit switches with the sword?)
Somewhat unsatisfying feedback when attacking with some weapons
Sometimes uneven difficulty (the boulder traps in level 2 and the pools of the ancient dead level are pretty tough)
Some trial & error (no clue to the order in which to step on the four icons at the entrance to the shadow demon lair?, die quickly from walking into the corn fields in the fields level - the game does warn you but only after you first encounter them)
Some levels are very short
Some framedrops
Some invisible walls
Easy metal giant mini-bosses in the fields level and you can spot them before they activate making them less intimidating (but not shoot them despite standing behind them and looking at the pilot from behind which is weird, some bosses are too easy)
Some weapons are too similar
Some of the hall of heroes rewards are pretty bad (one is just a couple of energy vials and the last one in the game is three vials (wtf!), two are a somewhat low amount of gold which you could've collected by replaying one of the early levels instead), no difficulty options
​