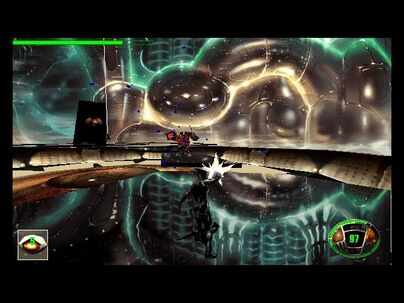 
​
+
Pretty fast movement
Some interesting sub weapons and tools (mortar - level design makes pretty good use of lob shots, homing missiles, decoy, robot disguise except for how slow it moves, airstrike - outdoors only)
Hover jumping (EWJ) and upwards air stream "sailing"
Circle strafing with mouse & keyboard controls
Pretty good variation (air diving segments (later used in some Sonic games), sniping, some minor puzzles (push a neutralized cart enemy and use it as a platform, final boss), tube flight chase segments after levels (similar to EWJ) - kinda meh and overly repetitive though, some skeleton/sled segments similar to Mario 64, wrecking ball room in level 2, snowboard segments in level 4 - pretty fun)
Nice art direction overall and some nice visual effects
Three separate viewports for following each bullet while sniping
Difficulty options (easy, normal, hard - mainly changes enemy health and damage dealt?)
Shows stats on accuracy, kills and headshots after beating a level
Can grab ledges to climb up (not flat platforms though?; EWJ)
A few hidden paths (can board the bomber plane near the control panel in level 1 to trigger an overhead bombing segment, hidden teleporter in level 2, )
Can temporarily boost your HP above 100 by collecting the HP items that run away from you (Doom)
Some surreal elements (similar to EWJ)
Some mini-bosses
Shows enemy health bars (except for while sniping or if you only use grenades)
Decent second to last boss (level 6 battle arena-style fight)

+/-
Save anywhere outside of on-rails segments (multiple nameable slots)
No enemy drops? - placed items only
Long levels
Player avatar is a 2D sprite during the main gameplay (3D model during the falling and flight segments)
Time limit to if you save a city or not for each level - see the green bar surrounding the HUD in the lower right corner. each one takes place on a giant alien crawler approaching a city (no penalty though?)
Can barely move while sniping (only strafe slowly) and if you do you can't aim at the same time
Odd clash between the visuals and the game's tone which is often pretty silly - kinda similar to the The Fifth Element movie
No lock-on
No block or dodge roll/dash moves
The last level (level 6) is very short
Can't use another sub weapon while the tornado is in use
Using the mini-nukes just to open certain locked doors feels like kind of a waste though I suppose that's part of the joke

-
Some control/interface issues (can't move nor shoot while looking up/down with A/S and can't use the mouse to do it (outside of sniper mode), can't look down in mid-air either, get knocked out of sniping mode if you get knocked back by an attack, mouse & keyboard controls don't work during the falling segments before levels as the settings are changed so the turning buttons end up mapped to where you mapped the strafing buttons, auto-drop 3 grenades if you jump while throwing them - can't move while throwing one, can't make the sniper zoom level not reset when going out of and back into sniping mode)
Overly spongy enemies overall (Normal)
Dead space here and there
Some trial & error (surprise attacks from behind, the robot disguise segment, a few cheap enemy placements)
Saved sub weapons don't carry over between levels
Sometimes overly dark visuals and sometimes inconsistent texture resolution
No intro cutscene on PC (added on PS1 but it's a bit meh anyway) and the rest of the story is mainly kept to the manual
So-so audio quality for the music (mono streaming at around 22Khz maybe plus it's kind of distorted, was rearranged for the PS1 ver.)
Kinda slow first boss fight unless you have the right sniping ammo and second one too unless you saved up on alternate ammo or sub weapons. Somewhat tedious sniper+hover segment in level 5. Kinda slow level 5 and final bosses as well
Sometimes uneven difficulty (not enough health in level 4, easy third and fourth boss (the fourth is also a repeated mini-boss) and pretty easy final boss)
A few tedious health item placements at the edges or corners of rooms
This version is missing the hidden area found at the beginning of the level right after opening the first door in level 1 (PS1 ver.)
Not enough main weapon variety (only one gun upgrade which works basically the same and doesn't last very long)
How you get temporarily stuck on top of one of the cannons in the shooting range room in level 2 until it recoils out of place feels kind of glitchy
Kinda short
Strangely calm level 5 boss and final boss music


Bugs:
-Sometimes have to press escape after loading a saved game or transitioning from a falling segment to the main gameplay to remove a black screen (Win10)
-Couldn't progress in the piano room of level 5 at one point (the mini-boss, had to reload the last save)
-The music sometimes cuts out during the level 4 boss
-The ending cutscene didn’t work

Notes:
-Seems you should use MDK3DFX.exe for high res graphics? (some say D3D has higher res textures but there's a letterboxing issue)
-dgvoodo tutorial for using D3D: https://www.youtube.com/watch?v=_LbIJdGNQfA&t=511s
-https://en.wikipedia.org/wiki/MDK_(video_game)#Meaning_of_%22MDK%22
​