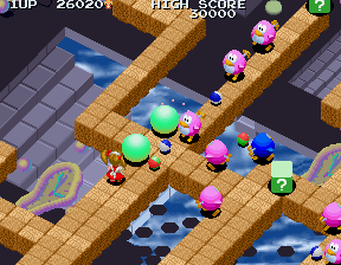 ​
​
+ Balloon power up (saves you once from a pit, a bit slow though and you can't choose where to land), charge attack (longer range, goes through a few enemies), good art direction and use of colour, some alternate paths through levels and some detours for power ups, temporary charge shot power up (rare though), pretty nice intro and outro cutscenes, pretty large boss sprites, temporary spread shot and speed (including jump length) power ups,

+/- The charge attack bubble pops if you charge for too long, no run or dodge or block moves, fairly forgiving hit detection around enemy projectiles, can't die from enemy hits (only get bumped back until you fall into a pit which kills instantly - however see below), isometric view platforming, overall time limit (usually pretty short though there are watch power ups that increase it), second music track sounds like joe jackson's steppin' out, some enemies can push or even carry you, difficulty options (coin worth, lives per continue, A-D rank (default is A) however the default is like hard mode for a console game of the time and there's no lower difficulty rank, "free play/continues off" toggle, no actual maze levels, fairly frequent checkpoints

- No invincibility time after taking a hit and each knockback is pretty big (leads to situations where you'll get thrown very far and into a pit just from one mistake), knockback length is inconsistent and some enmies will pull you far back at a high speed for some reason, no strafing, the charge attack also cancels if you jump (which you need to do a lot of), very steep difficulty curve (third level comparable to late-game Gremlins 2), while there is a jump shadow it disappears over pits (where it would've been useful), jumps are too tight and numerous after just a couple of levels, repeats some enemies and foregrounds, no permanent alternate weapons or upgrades, the useful power ups are too rare, slowdown (levels 8-9 mainly), uneven difficulty (spikes at lvls 6 and 8-9 (including the final boss), easy lvl 5 boss, lvl 7 easier than 6), the blue snake-like enemy is really annoying (can't avoid it by not shooting the item container), trial & error (better to skip most enemies in level 8, bombs still go off if you move close (which you'll generally have to do), tedious final level (tons of enemies and projectiles causing slowdown and almost no power ups),

Notes:
Press F2 on boot up for the options menu