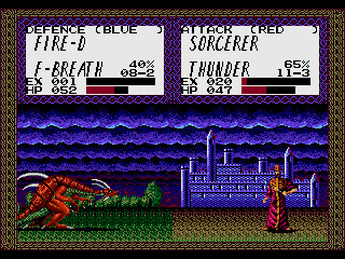 +
Two campaigns and 14 skirmish mode maps (the campaigns use slightly modified skirmish maps)
2-4 player vs.
Five different factions
Some innovations (each unit can be upgraded twice (changes it into a different unit with new abilites and higher stats) and the units carry over to the next battle in campaign mode (using the Call command), hold B to quickly move the view across the map, fairly detailed terrain effects (some units can’t traverse high mountains or water for example, fortifications give a battle advantage), capture towers on the map to increase your unit cap – can also be used to heal units)
Some interesting spells (Warp, Meteor, Elemental unit attack, Again (the affected unit gets one more turn), Reverse (reverses the day/night cycle))
Technically impressive soundtrack despite it not using samples
Pretty good battle graphics for the time (large and detailed sprites with animation though they’re not always well drawn)
Change the music during battle (can’t choose some of the themes though such as the one in the menu)
Dark/bleak fantasy theme
Hard to win by rushing?
Various options (speed, music theme for each faction, amount of MP regenerated per turn), pretty large variety of monsters, save feature (only one slot though), day/night cycle that affects the damage output of units depending on their alignment (lawful, neutral, chaotic) – causes a 25% difference in damage for non-neutrals, the real damage (damage after bonuses/penalties are applied) a unit can deal to another unit is displayed by the game (however you need to move up to the enemy unit to see the info, so calculating it by yourself is still useful)

+/-
Ranged attacks only reach an adjacent enemy unit (you can see in advance if it can retaliate though)
Can’t move past your own units with flying units
No fog of war or hidden unit stats
The master (commander) can’t leave its home base or gain levels
Elemental attacks (Force) are kind of overpowered in skirmishes (hard to kill until later on, infinite reach) but become less and less useful in campaigns (can’t level up)
Time limits and you need to wipe out each enemy master (different for each scenario but it can’t be manually adjusted; game over if you run out of turns despite having the upper hand at the end)
Some spells can hit your own units
While there are speed options it would’ve been nice to be able to skip one animation/move at a time by pressing start or something
Randomization can play a fairly big role in individual battles
Units gain experience not just from defeating enemies but from fighting them as well
The ‘Help’ option (speeds up unit movement selection but auto-picks the destination) could’ve been more useful if you could customize it better (for example making it focus on towers or enemies exclusively), no neutral monsters to build experience on, the Storm spell and the Phoenix unit are overpowered, the computer never uses any other spells than Meteor and Force?, no need to worry about range when casting magic, can only use one spell per turn (so there’s no point in trying to save MP for a larger spell strike later on), masters are immune to spells, perma-death on monsters means you need to be careful not to lose too many higher level monsters early on (since the computer can summon higher level monsters later on while you can’t and the Meteor spell can take out some level 2 monsters in one hit),

-
Slow and unresponsive interface in some cases (while moving a unit (can’t hold B to scroll quickly here) or browsing the army list in the Table window)
Can’t quickly cycle between units
Trial & error (monsters get their HP restored when leveling up, no in-game explanation of the different factions, hard to tell what will be affected by Storm or Stream, the amount of damage done (or HP healed) isn’t shown while spells are being cast so you have to check the affected units one by one, need to pick spell targets before selecting the spell, no area of effect shown before casting a spell, unit strengths and weaknesses, choosing and then cancelling a fight command after moving a unit means you can no longer cancel the move command)
The mini-map doesn’t show units or which towers belong to who (they’re always neutral there)
So-so colour choices overall
Uneven presentation (battles look a lot better than the rest of it)
Some hidden unit stats (movement type, attack type, damage resistance)
No overarching story or context to battles (except for a basic backstory about a tournament in the manual)
Somewhat annoying "Warp spell standby" sfx
Some unit name abbreviations
No map or unit editors, Again makes Quick and (depending on the unit) First redundant, view goes back to the player’s master at the beginning o each turn instead of where it was at the end of the previous turn, can’t discard units, no team battle option, some tedious maps (large, non-flat terrain),

​
Notes:
- There’s a limit of 30 monsters per faction and of 56 in total per battle
- Note that monsters have a zone of control. If a monster enters a hex that has an adjacent enemy monster, it needs to stop. The game already considers this when showing the possible new destinations a monster can be moved to.
- Each 30 XP gained adds 01 damage to each attack of a monster (check if it affects elementals).
- Campaign only enemy units: Amazon, Cocoon, Guardian, Mage, Musha and Valkyrie

Bugs:
If a confused monster is killed, strange things happen. I don’t know if this was intended as a compensation for the monster owner, but looks like a bug to me. The killed monster will return at turn end, with colour of its original master, 0 HP and 0 XP, to the hex it was when killed, even if this puts it over another monster.