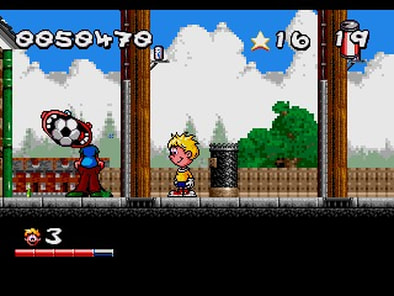 
​
​+ Pretty advanced football play mechanic (use the ball as a spring platform (can also place it in some liquids) - similar to Soccer Kid, knee bounce, head bounce, lobbing, backwards kick), can teleport the ball back to your avatar, run button, nice animation, comical tone (one human NPC swallows your ball), pretty good art direction, hidden items (not sure if they unlock something), level map with some animation, gun power up (rare and on a timer though), smart bomb power up (trigger on touch?), pretty nice intro, pretty frequent checkpoints, temporary invincibility power up (very short though and sometimes poorly placed),

+/- Can't grab stars by shooting them (can grab some items though? as well as with the smart bomb), linear structure, password save (short), holding the button down while shooting lobs the ball slightly, backwards kick only has one set height and length, very forgiving mid-air control, can't shoot the gun while jumping and can't keep the gun for later by switching back to the ball, few bosses (decent though),

- Various control issues (some delay before you can shoot again after the ball bounces back to you if you're standing still, pretty easy to accidentally lob the ball a bit if you just mash the button after teleporting it to you to quickly attack a small enemy on the ground, sometimes annoying how easily the ball falls down near platform edges, have to use the teleport feature to regain control after having head bounced a ball and moved away from it, can't use the teleport feature while standing on a pushable box or a moving platform, floaty jumps, no jump height control (have to jump to head bounce a ball higher) and you keep jumping if you hold down the button, tricky to lob diagonally properly without moving forward or performing a backwards kick trick (have to hold the button a little bit and press up right after touching the kick button; a Yoshi's Island-like control would've worked better since there are many enemies and hazards that require lobbing), can't jump down through platforms you can jump up through, slow turning when running even if you only took one step), trial & error (shots from off screen in the forest, some quickly moving enemies and the teleport function is a bit too slow so you have to move slowly forward, some leaps of faith), so-so use of the FM sound chip, some waiting for moving platforms, no item explanation in-game, forced seearch and destroy missions (barrels) in several levels, sometimes overly saturated colors,