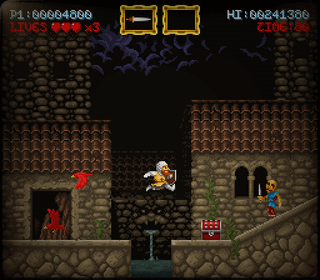 +/- Can't move while attacking or while crouching, can't shoot while climbing, huge knockback, unlimited continues (however you can't get the good ending if you continue more than 4 times?), the game looks more like ghosts 'n goblins while playing and sounding more like ghouls 'n ghosts, no 2-player, no weapon/attack power/rate of fire upgrades, the 4 different weapons are pretty similar in behavior but they're all useful, faster rate of fire when close to enemies (but you need to have the right timing as well - mashing makes the attack slow down), no shops (treasure is just for points), can take three hits before dying by default (two in G'nG), need to beat the game without continues for the best ending, pretty forgiving hit detection overall (not at the moving cloud platforms' edges though),

- No saving or difficulty options, trial & error (boss patterns, very hard to spot the last of moura's tears, some cheap enemy and hazard placements), the avatar doesn't properly stick to the moving platform clouds during the second boss fight at times, no jump height control, can't skip cutscenes or score countdowns at the end of levels, character auto-grabs vines and chains (would've been better to make you hold up or press a button), sometimes annoying instrumentation and sfx (respawn sword sfx, mostly mono music?, seems like the game uses the YM2151 chip limitations which means it could've sounded technically better in some aspects), sometimes uneven difficulty (sometimes a bit far between checkpoints, maze segment, turtle platform segment), kind of tedious maze segment (not that long but some of the enemies are annoying) and dark cave segment (the NPC that lights your way can make sudden movements in the wrong direction if you throw your weapon towards it which you pretty much have to do), repeats some enemies/hazards and bosses later on, no main weapon inventory, uneven spritework at times

Bugs:
-At the lvl 4 boss the avatar can become invisible from getting hit by one of the small blue souls