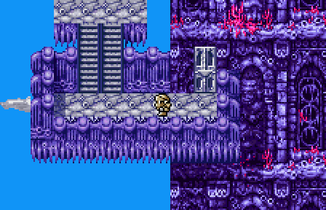 +
​Decent character customization (sex (determines some skills), race (human, mutant/Esper, eight kinds of monsters (four starting ones, four recruitables))
Speed up dialogue by holding B (there are also text speed options (8 different speeds))
Attacks are now redirected if a monster dies before their execution in battle
Run button
Hidden store
Fast menus/transitions/inns
Some good humour (bizarre (king wants to marry a slime), silly (priest partially submerged in water in south town), etc.)
Some interesting mechanics (recuit your entire party (up to four characters), lives/hearts - restoring a character at 0 HP costs one life and if they all run out they need to be revived or replaced (only the main character has to stay), purchaseable stat boosts (humans), near random ability growth and reductions (mutants/espers), Pokemon-like growth through eating (monsters), level up esper/mutant stats/skills by using them in battle - see FF2, order has some effect on mutant stat gains?, non-random encounter monsters (in dungeons) which don't attack the player - however they're mixed with random ones, dungeon escalators and fake doors/ponds)
Pretty good art direction
Fairly open ended beginning (kick members out of the party already in the first town, 2-3 different dungeons to visit)
Equip several weapons at once (to switch between during battle - more tactical flexibility)
Mixes fantasy with modern and sci-fi elements
Vehicles (airplane, bike)
​Rendezvous with story-relevant NPCs one last time before the final battle, raster effect on some killed bosses, some good puzzles (old man riddles - randomly chosen between three different ones in the WS original ver.), still fairly challenging when fully powered up unless you make a human and mutants only party, WS Original ver. fixes the Saw bug (effect was reversed in the original making bosses deathable), improved cutscenes (plain text intro on GB), god is the final boss
strafing (hold l/r),
stackable items
three different ending segments/endings (good, evil, neutral),
the town invasions,
meaningful choices overall (to do the right or wrong thing in some quests, what quest rewards to get),
ditched party members can generally rejoin if you revisit them where you first picked them up, + you can kill death (or sacrifice a party member to him for a weapon), some interesting dungeon elements (monsters obeying bosses that you can do quests for won't attack you any more if you help their boss, fake stairs), some nice visual touches (foot steps in the sand, final dungeon, final boss background), pretty cool final dungeon

+/-
Main char/leader doesn't always do the talking in story scenes
Armor lasts forever
No auto-battle command
Several fetch quests
Lower (Human) HP and stat limits than in the GB original (999 and 99 respectively, the latter used to be capped at 255 but only showed 99 so if you raised a stat more than that it would reset to 0, HP was capped at >2k HP so it was less likely to reset)
Humans can't generally use spells or mana-dependent weapons (you can't boost their mana except for a small equipment based upgrade near the end)
Weapon durability (some are or end up indestructible though (excalibur, katana)), different sexes have different stats (seems based on gender norms, female mains have more expensive starting equipment though which makes them a little better), consumables need to be equipped to a specific character to be used in battle, static difficulty, very little party banter, somewhat random final boss difficulty (sometimes does either nothing or something stupid for one or two turns), can't revive characters during battle, in the WS original version the glass sword has only 1 in durability while the masamune is indestructible
save anywhere outside of battles (only one unnameable slot though),

-
No in-game maps
Can't get past the non-randoms in narrow paths (they respawn right after the battle)
Fairly frequent random encounters
Non-stackable items (however potions for example can be used more than once)
Characters don't remember commands between battles
Inconsistent dialogue initiation controls (sometimes B button, sometimes either pressing B or by bumping into the NPC)
Repeated lines between NPCs
Pretty bare bones dialogue and lacking exposition/lore
​Battle/item/shop menus don't wrap around while other menus do, can't choose not to use a skill/weapon during battle if it's the only one available and you want to save it for later (and there's no defend command), no tent-like item? (for restoring ammo based monster attacks), the eat/don't eat menu almost covers the entire killed monster's name after battle, hard to escape from battles, can't immediately see other stat gains than HP when using boost items on human characters, very limited inventory, only one save slot, highly randomized stat gains from for example the HP#00 items, dated interface (lacking context sensitivity (need to go into the menu to use crystals in front of the tower doors), can't see what category (see notes below) a weapon belongs to, no notification when your stats change/when a mutant gains/loses an ability, tedious to build humans with the up-items (one at a time, small inventory, random growth which isn't helped by resetting in the WS original ver.), no item sorting, can't buy more than a set amount of an item at once (generally 2-4, only one at a time when it comes to armor and weapons), can't see if a piece of equipment is already owned/equipped or if it's worse or better for a character in the shop menu, can't see how far you have until the next weapon level or stat gain)), can't repair weapons, can't teleport out of dungeons or to visited towns (can get a super rare mutant ability/rare monster ability/super rare item (Door) to teleport between floors though), meat sometimes doesn't drop (and never drops for more than one enemy type), kind of annoying how you can get duplicate mutant abilities if it's something you don't want, some trial & error (poor directions to the NW skyscraper in the ruined world part, can't re-enter the hidden cloud world town after killing Byakko, examining any orb in the sea castle actually teleports you back to the whirlpool, various mechanics, unexpected boss fight in hero town, gain (Mutant) HP from taking damage, not knowing when you can drop certain items like the air seed), can't restore a replaced party member nor replace a living member, HP600 is wasteful (costs less to get a bunch of HP200 items though it is very time consuming), shields kind of suck (need to be used manually in battle before enemy attacks as well as with planning to make use of temporary barrier effects for the entire party), auto-scrolling text when talking to the old man after solving his riddle, NPCs don't move out of the way when moved into, some re-used rooms, can't re-order monster and mutant abilities, monster's Teleport ability moves you between the floors of the main tower (if you're not in certain dungeons? - trial & error), many enemy types share the same sprite (goblin and ogre for example), monster growth stalls a bit slightly before and in the ruined world, invisible NPC corpses (?) in the last neutral area before the final boss, some bugs (charm?, bugged elemental weaknesses?), some things can't be bought in the final town (cure, stone, flare, blood/vampiric sword - can refill these with philosopher's stones though if you managed to keep them until then), steep learning curve (lacking in-game explanations, somewhat lacking and sometimes incorrect manual) - the game isn't very complex in the end though, monsters are underpowered (late game) and unforgiving to play as (need a guide to know what you'll transform into when eating different meat unless you use save states in an emulator, can't use or carry items, can't save found meat for later), no journal/quest log feature, some dead ends, grinding for money (if you have more than one human or if you want to buy "ability weapons" as well as for stats/meat, plot oddities (can't talk to NPCs in Ameyoko (NW ruined world town) except for the shop keepers, you can sell the air seed while underwater, mostly lacking in dialogue updates based on previous events, what happened to the SW town in the ruined world inhabitants after you finished Erase99 (barrier destroyer item)), need to memorize some shop locations due to limited stocks, non-animated monster sprites in battle, some unfinished looking backgrounds, unfitting music in the sea castle, plain text intro,

Notes:
Strength Based Weapons: Axes, Hammers, and Swords (except for the P-Sword and P-Knife)
Agility Based Weapons: Rapiers, Sabers, Projectile/Ranged weapons, Whips and the Saw
Mana Based Weapons: P-Sword, P-Knife, Vampic Sword
-Early on in a game, focus on agility since it affects both agility-based weapons (cheaper), projectile weapons, and the hit chance.
Later on, switch to Strength based weapons since these will be the most powerful. Examples: Defense, Sun, Glass, and Excalibur swords.
ESP=Telepathy ability? Either that or Burning=Telepathy
-Statue side world is a good place to level up your monsters before world 3