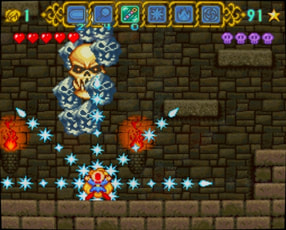 + Good bosses overall (some have multiple forms, there's a bunch of mediocre ones in the last stages though), collect spells and switch between them on the fly (grapple hook, smart bomb, roll move), some good enemy AI (some dodge your projectile attacks or hide/block when you're close), expressive sprites (your avatar has a slew of voice samples used for each of her moves), hidden items, some alternate paths, HP upgrades, up- and down thrust, decent cutscenes and art direction, mini-bosses (sometimes harder than the main boss), frequent checkpoints, some minor puzzles, roll move (lets you climb walls, creates some interesting platforming puzzles), enemies also get hit by some traps (the laser turrets for example)

+/- Ammo-based spells, maze-like structure to levels (would've been better if there weren't points of no return and blind jumps), female protagonist (a witch), momentum-less jumps, no dodge or block move?, pretty easy to refill your health from respawning enemies, fall speed increases drastically after reaching the altitude you started from when jumping, grappling hook doubles as a weapon and is a bit overpowered in some situations, can't move while ducking or swinging your sword (some spell attacks allow moving while they're activating though), easy to rack up extra lives, no save (it's about 1h30m long), can't switch spells while pausing, infinite continues?

- Invincibility time on bosses also cancels out some of their attacks making them too easy, some control issues (falling too far causes a bounce animation when landing (see Kirby's Adventure), pressing up makes you jump straight upwards without being able to control the jump direction, knockback from hitting walls, can't look up/down, hit detection problems when pressing against a wall and trying to jump), some slowdown (pretty severe in the last two stages), trial & error (shots/traps from off screen, boss and enemy patterns, blind jumps (can't look up/down), avoiding some of the points of no return), takes a while to replenish ammo in most parts of the game, some muffled and slightly scratchy voices, the music's much lower in volume than most of the sfx, no difficulty or control options, smart bomb spells don't do more damage vs. bosses despite costing more, underdeveloped/generic puzzles (borrows from Mega Man, Zelda, Metroid, Sonic, Monster World IV), somewhat uneven difficulty (some later bosses and segments are pretty easy, easy final boss), repeats some enemies and bosses, some tedious vertical platforming, the flame traps that you’re supposed to freeze don’t register a hit if you use the roll move (the game treats it as a normal wall)