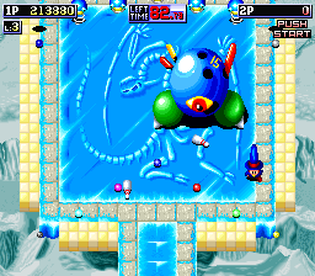 
​+ 2-player co-op, good mid-air jump control, some alternate paths through levels, very good bosses overall (two phases each), charge shot which you can use the charge of to attack enemies with by jumping over them, some large sprites, decent art direction, can cling to a platform's edge and climb back up if you accidentally walked off a ledge, temporary shield power up (collect more fairies in quick succession for a better shield), your shots ricochet for a bit after firing, temporary giant power up (gain speed, become invincible to hits),

+/- Level timers, mini-games after bosses (first one is a very hard button masher, second one is a decent whack-a-mole clone, third one is an easy gallery shooter; after that the latter two repeat and become harder) - win 1-ups, one hit deaths, charge shot takes pretty long to charge and it's binary - you either fully charge it or you'll fire a standard shot, respawn on the spot even after using a credit, temporary shot upgrades (triple shot and heavy shot), AY-3 PSG+PCM for the music (odd combo but still sounds pretty good), collectathon

- Some control issues (no jump height control, can't shoot in mid-air except for charge shots which'll stay at ground level, no strafing, can't stand still and aim), no block or slide moves, some trial & error (boss patterns, some cheap enemy spawning points (blobs appearing very close to your avatar), no auto-fire, some garish backgrounds, a bit short, lame ending and no intro

Notes:
-Instruction messages are in Japanese