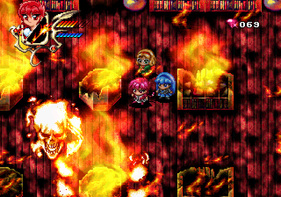 
​
+ Three different characters (different weapons and spells, different comments on examined objects) you can switch between on the fly, separate diary entries for each major scene, some good dungeon designs, get advice from Ferico if you get lost, mixes in a lot of anime FMV, lighting and transparency effects, slightly animated character portraits during dialogue with important NPCs, fast dialogue speed and overall good flow to the script, minor puzzle solving (the fact tat you're a party is underutilized - could've been similar to Legend of Zelda: Four Swords), hidden items (HP/MP upgrades), charge attacks (run while charging), good animation overall (your characters' walk/run animations are super cute), sometimes humourous (Working Designs), save feature (six slots), some good bosses (tree of life, pink haired villain finale), sometimes a teleporter is created at the end of a finished dungeon (leads to the beginning of the same dungeon), nice spell effects, read the antagonist's henchman's (Innova) diary (collect 7 of each type of amulet), mixes in a couple of vertical shoot 'em up boss fights at the end, checkpoint before the final boss (point of no return before the second to final boss)

+/- Cutesy/kiddy style, there's also a fortune teller to give you clues in return for money but they're not very useful, can't use Fuu's healing to revive allies, ally pathfinding is pretty bad (doesn't affect gameplay much but looks bad), automatic movement between areas on world map (somewhat slow, you can control it only after having visited the area you want to go towards by pressing Z in an area), can't move while attacking, momentum and charge attacks reset when changing screens (moving between areas), you don't get a dash ability until halfway into the game or so (the control menu says to press X/Y from the beginning of the game so you're left wondering if there's something wrong), running speed decreases when changing direction, can't carry more than on HP/MP potion at a time, short range unless you're using the bow or charge attacks, one can hit enemies from a different height (creates some safe spots, though enemies respawn if you move away far enough), MP slowly regenerates, no clues to finding some of the rainbow amulets,

- Somewhat slippery controls, saturday morning cartoon level storyline (see Sailor Moon, super cliché and kiddy with sometimes nerdy dialogue, Working Designs also added a lot of juvenile or perverted humour into the mix which sometimes works and sometimes doesn't), some obnoxious acting, hit detection is somewhat off (unforgiving around platform edges and near some enemies, especially when facing south and when battling the fire skull boss, sometimes it glitches out a bit around walls (see the area outside of the tree of life for example)), starts with  ~20 mins of unskippable cutscenes and tutorials (a few more unskippable tutorials later), pretty non-interactive scenery (you can check most things to get a comment from one of the girls though), no multiplayer, some annoying sound effects (some are too loud compared to the music as well), can't skip any spoken dialogue, the mixture of pre-rendered graphics + early CGI + 2D sprites + FMV is a bit jarring at times (the art direction is still good overall), somewhat lacking sprite animation at points (forest), health potions are barely worth buying at first (since you have healing magic), odd hit detection/mechanics in the whirlpool/stormy sea area, tedious mechanics in the cave by the winter town (can't jump off the lifts once you're on them) and in the sky garden dungeon (waiting for moving platforms), can't jump down ledges in towns, plot weirdness (can't resist getting thrown in jail in the Sky Garden mansion and there's not much of a resolution after having proven your innocence, the ice block covering the entrance to Rafarga's house - how does it recover in an instant several times when it's supposed to be snow clogging it up gradually over time?), some resilient enemies that don't (or rarely) drop anything, need to have the Escape Gem (expensive) in the lava cave if you want to reach and return from an item container on a small island - otherwise you'll be stuck there (or you can reach it much later using the float spell), enemy drops can get stuck inside walls, no real sense of urgency during the fire in Laye (no time limit, most of the fire doesn't hurt), sudden difficulty spike at the fire skull boss (unavoidable attacks, unforgiving hit detection), you'll get stunned for a couple of seconds after taking a hit, repeats music tracks for some areas, some trial & error (the shoot 'em up style final boss (doesn't signal most of its attacks), shots from off screen, fast enemies, boss patterns), some slowdown, grainy FMV (acceptable in 1995 but could've been improved upon for the localization), can't pause during the aerial boss fights at the end, no voice acting during the in-game cutscenes at the end, only a lamp post separates two different exits at one point (before the waterfall area)

Notes:
~5 seconds of loading between areas and when entering/exiting the map screen
More slowdown (Polizu) and more spoken dialogue in the JP version (removed to increase gameplay flow)
The pathfinding of the girls you're not currently controlling is a bit screwy (you can still switch between them so it doesn't affect gameplay, just looks weird when one of them gets stuck or lost)