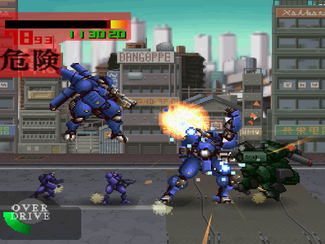 + Story (SP beat 'em up) and vs. (fighting) modes, plenty of moves (similar to SF2 but with guns added), satisfying combat sfx and feedback, pretty good art direction and in-game animation, improved sprite work and added zoom in/out effects and transparencies compared to the PCE CD/FMT/X68K versions, difficulty and speed options (game is fairly hard even on Easy (default setting) though), dash and throw moves (enemies seem to get priority on throws), some large sprites, charge mechanic (build up "overdrive" by fighting then unleash a more powerful move - not sure what the button combo is though so I only pulled it off 3-4 times), unlockable robots?,

+/- Some delay between various moves, different physics/moves/enemies/backgrounds compared to the PCE CD/FMT/X68K versions, gameplay is single plane while the backgrounds make it look like you can move on the z-plane, can't punch an enemy to make it fly up into the air for combos? (can usually squeeze in an attack as an enemy bounces after being knocked down though), respawn on the spot,

- Very basic level design (just long corridors), no tutorial/move list, bland intro (mostly text) - a bit better on PCE CD, doesn't show lives/credits in-game, easy to get juggled between a group of enemies until you're almost dead due to a very short invincibility time - same with some boss attacks, barely any difference between firing your gun and doing a slide attack in terms of speed, too easy to just repeat the slide attack over and over through several levels, short (6 levels/~30 mins), the second to final boss (some sort of generator puts up no resistance after destroying the two drones), so-so animation during cutscenes, no control options?

Bugs:
-no music during boss fights or the credits (ePSXe)