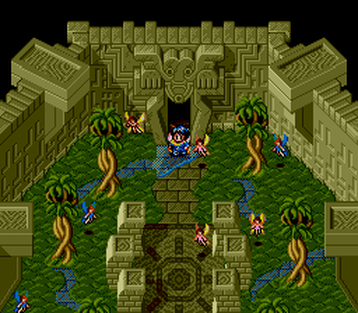 ​
+
Save anywhere (at a small cost - removed in a restoration hack)
Great animation and use of colour
Tough bosses
Excellent cutscenes
Auto-battle and AI tactics system (assign a specific action to each party member, like in PSIV)
Decent voice acting overall
Not much grinding required
Decent puzzles
Great menu interface
Your party will often talk to NPCs and they usually something more if you talk to them twice, Characters talk a lot with npcs and between themselves
Humorous (the humour isn't always great though - Working Designs inserted a lot of silly humour and real life references)
Choose which spells to upgrade
Pretty advanced formation system for the time
Teleport out of dungeons
6 man party (w/ Leo)
One on one fights
You get to control the air ship Destiny (but only as a boat/tank)
Rare encounters
Some good dungeon puzzles (blue spire, ghaleon temple, yeti area, final dungeon, red dragon cave, lion's head)
Good enemy and background variation
Two optional dungeons
The karate tournament (this should've been a battle arena later on where you could choose your party)
Decent character development/background exposition (Ronfar only gets 1 or 2 moments tied to his story though)
Epilogue quest

-
Frequent random encounters
Ruby's voice
Saving costs points used for upgrading spells (upgrading is expensive)
Most dungeons are very large and without maps (there's no map of the world either - maybe it came with the game?)
The ghost mansion (very linear and tedious)
Minor loading time after each battle
Hard to acquire MP healing items
Cheaper magic attacks will often cause nearly the same amount of damage as more expensive ones
Can't change battle speed
Somewhat uneven difficulty (Leo, Karate tournament, Blue Fiend, and one of the towers in Pentagulia are very easy, Tabe's peak, Borgan and the plant Beast the opposite)
Plot devices (your party keeps splitting up and that's when trouble happens, why did ghaleon mess up Leos capture of Lucia? Why didn't Nall tell us about the dragons? Why didn't Ghaleon take Lucias power at once? You can't exit the main temple after Mystere splits, Fake Althena and her Heroes wait until you find the real temple before showing up, etc), the Mystere thing was just silly, Star Tower location not mentioned through entire game?, ice tower location only revealed by Nall after you talk to him repeatedly
Battle tactics are sometimes reset
Wind and earth magic is pretty weak
Slight delay between battle actions (can't change speed) and before cutscenes
Somewhat lacking in mini-games and sidequests (only one of each respectively?)


Comment:
Right away I was impressed with the presentation of this game. The intro with its beautiful spritework and wistful music makes you want to lose yourself in the game world and for the most part the bar set there isn't lowered too much, despite the cheesy voice work and silly plot devices here and there. Gameplay-wise it's pretty solid, featuring an interesting battle system, a large world to explore and some surprisingly difficult bosses. I remember getting lost on the world map a few times, but that was probably my own fault. As for the localization, WD said it well: localization is more than just changing item names and translating a story word-for-word. It's about conveying what the game is saying and making the player feel something.