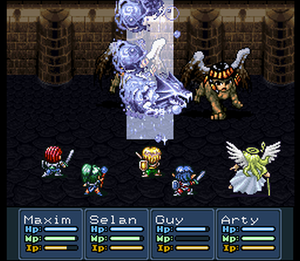 + Fast paced, good pacing (dungeon crawling/exploring/town ratio), IP system (build up IP bar by getting hit - similar to FF's limit breaks, then use IP for special abilites tied to weapons - some tactical choices involved here since the best IP equipment usually doesn't give the best stat boosts), no random battles in dungeons (but on the world map; can't avoid most battles though because you'll be moving in cramped spaces or being forced to fight), somewhat comical (whimsical), good dungeon design (borrows heavily from Zelda), nice strategic element to attacking monsters in dungeons (facing decides who goes first?, arrows to stun enemies, etc.), warp (go back to an already visited area) and escape (exit a dungeon) items, hidden items, capsule monsters (pre-dating Pokemon), optional boss (much harder than the final boss), retry mode (new game+), gift option (pick your own party out of all the playable ones in the game for the ancient cave dungeon after beating the game once), sidequests - ancient cave (100 floors of battling for loot), save in towns and mid-way through dungeons (four slots)

+/- Light hearted, tile-based movement, in the catfish dungeon you can go beat the boss without picking up the party member here, pretty random monster behaviour in the overhead view, dungeon bombs don't affect monsters, some gender related statements (Tanbel), the ending scene is almost exactly the same as the intro scene from the prequel (this one takes place right before the first game), no explanation for the game handing out clues on stone tablets in some dungeons, can't choose who to give the money to from the ruby apple quest, mostly small towns with only one or two events/quests each

- Equipment is pretty expensive early on, some dialogue misses (yes/no dialogue options swapped in second town, some grammatical errors), clichéd storyline, sometimes stilted/inane dialogue (the dinner in the beginning), some cluttered looking backgrounds, story starts off pretty weak (chain of events without much of a goal for the characters to work towards), some annoying sfx, blatantly obvious stone plate clues in the second dungeon (catfish boss), some translations problems (when you ask about capsule monsters in the second town, for example), can't make NPCs move by pressing against them, plot oddities/conveniences (the crown theft scene, clueless wife of Rochy), tedious backtracking for the chests in Tanbel tower (need to resolve all puzzles), some trial & error (boss in Tanbel tower can kill a party member in one turn if you're not strong enough), nonsensical music puzzle in Tanbel tower (not hard to figure out though), so-so animation for the time, sketchy dialogue in Parcelyte (can't respond to the woman wanting to sell her house or Selan before seeing the king, guard at the western shrine keeps telling you to watch Selan's training),