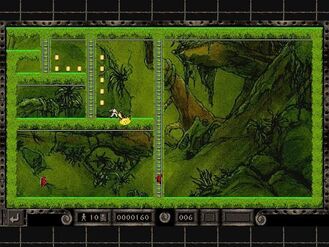 + 2-player co-op and vs. (off- and online, "only" 150 levels though), level select from the get-go (only negatively affects your score), quick restart level option in the pause menu, can start running over a trapped monk right as he falls down (helps flow), can slide down ladders, new single use trap items (snare traps, incapacitating sprays, jackhammers - penetrates rock tiles, two types of bombs (larger one permanently destroys rock tiles and other items besides exit doors), pickaxes (which make a pile of rock from the ceiling blocking enemies from advancing), buckets filled with goo that is used to cover surfaces and slow characters down, befuddlement gas - temporarily stuns enemies in its small area of effect), new ground surfaces (fake floor, gooey floor - slows players and enemies down), dark levels (pitch black save for a moving circular patch of light (from a pendant item) within which the player is visible), 180 levels, level editor returns with some new features (group levels together, tileset options, night or day option, music option), enemies can temporarily steal items (they'll eventually place them somewhere else), control config, can quickly walk on top of an untrapped monk from one tile above (even several in a row if they're close enough together), teleporters, can play the original game's levels (easter egg), save feature (at the start of any level, many nameable slots), music and sfx volume config, very good enemy AI, cutscenes show how to use new items, enemies don't start moving until you do so you can take your time and think about how to beat a level, rumble feature (bomb blasts),
On-Line ver. additions to The Legend Returns: Remastered redbook audio OST (nice though there's a bit of a clash between the high-res music and simplistic visuals), bombs which constantly self-ignite and reappear on a set timer, different visuals for each "world", new hazards (such as phase blocks which disappear and reappear on a set timer (and consequently can tear apart players or monks standing in the location of a vanished block in the process of reappearing) and lethal liquid tiles, can specify certain items to be able to be picked up by only the player of corresponding color in the level editor (e.g. bombs with blue outlines can only be picked up by the second player), may place multiple exits throughout a level and the exits can be programmed to lead to differing levels in a pack - similar to Kid Chameleon), fixed many glitches found in its predecessor (mainly that of monks getting stuck while chasing the player), expanded ending, runs faster by default,
Definitive Edition: 4-player online, toggle bugs/quirks on or off, modern gamepad support (the control config doesn't seem to work with an Xbox 360 controller though), new editor features (improved mouse control, shuffle the order of puzzles, paint helpers show you exactly where you're painting, easily visualize teleport links, flip regions horizontally or vertically),

+/- Very steep difficulty curve, respawning enemies, one hit deaths, very zoomed out view and single screen levels, collectathon (everything in a level to unlock the exit, sometimes you just need a key though), monks still attempt to climb out of a hole when there's another free tile next to them (climbing air and falling back down again which looks odd), monks only fall one tile down despite there being empty space below it so it looks like they're standing in mid-air (a slim streak of ground tile graphics could've been kept maybe?), can't jump, minor difficulty options (starting lives, time limit toggle and slider; no difficulty modes), could speed up/slow down the game in The Legend Returns (F6/F5), kill self button for if you get stuck, the extra lives system is kind of pointless when you can save at the beginning of every level, bomb blasts will ignite and detonate bombs that you haven't picked up yet as well, resource management (bombs, ),

- Plenty of dead space (long ladders and flat spaces), pretty basic visuals, trial & error (hidden treasure in some levels (with a limited number of bombs to find them), enemy AI quirks (if you stand in the right spot in some levels the enemies will move to some remote location and stop there), removing a tile while an enemy walks on it won't work, placing a bomb while shimmying (?) on a pole while touching the ground won't work, invisible floor traps, can't remove a tile below a ladder without bombing it?, sometimes can't grab the lowest part of a ladder if the ground tile beneath it is removed, can't hit enemies with bombs at certain angles (at the lower corner of the blast?) nor through rock walls?, can't remove gooey tiles), some minor control issues (can only fall straight down, have to press a button to pick up keys, ), a bit repetitive, tedious backtracking in some levels (level 13 for example where you have to repeatedly climb and fall to collect a few items at a time), sometimes uneven difficulty curve, one annoying music track in World 2, kinda long pause between music tracks (CD ver. only?),
​