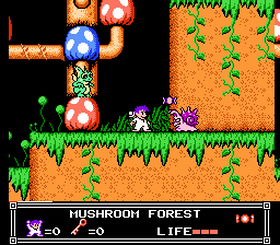 ​
+
Feed animals to put them to sleep and then wear them as costumes to be able use their abilites (Yoshi’s Island seems to borrow from a bit from this game)
good variety
interesting art direction
good use of the NES palette
many moves - wall climbing
flight, digging, get a magic wand with a charge shot later on, nice cutscenes, some large bosses, Nemo kills the friendly animals?, hidden items

-
Some trial & error (the train segment, getting used to each animal form, bosses, sometimes hard to tell what you can and can’t jump on)
annoying enemy: respawning pollen
somewhat sloppy hit detection (larger sprites, lava traps)
no options
some animals can’t attack at all
​Nemo can’t attack while crouching, you have to feed creatures 3 times for some reason, the mole can’t jump and moves very slowly, very frequent enemy respawning, you have to collect 6 keys in each level to progress (leads to backtracking), you can’t move or even turn around while charging the wand and it only shoots diagonally upwards while giving a huge recoil (if you're close to a ledge), minor slowdown