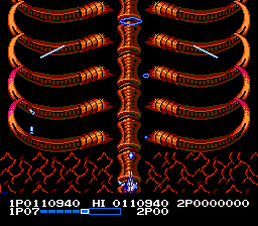 +
2-player co-op
some large and detailed bosses
good variation
mixes vertical and horizontal gameplay
quite fast paced and intense at times
good use of color, shield power up

+/-
Gradius-style weapon system
unlockable hard mode
respawn on the spot (with a free speed upgrade if you had a power up stored before death, you can also regain the gun drones if you’re fast/lucky as they float off screen)
upgradeable rate of fire (starts off slow except if you get close to the target, need to upgrade each weapon separately)
somewhat forgiving hit detection overall

-
Only 3 weapon types to power up (missile, ripple, laser)
uneven difficulty (impossible to recover after death after a few levels, most bosses go down too fast when powered up and some later parts are too easy)
trial & error (regenerating/spawning wall mechanics, enemies and traps popping up out of nowhere, escape sequence)
somewhat sloppy hit detection (the fire walls)
slowdown
​some dead space in the final level, no options menu, a bit short (7 levels), can't lower ship speed after upgrading