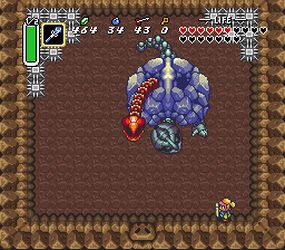 +
Large selection of equipment
well made adventurous atmosphere
good length
great dungeons overall
good bosses
great art direction (very consistent), the game world opens up rather elegantly (begins with a tutorial that doesn’t feel like one, the "gates" don’t feel too forced), many memorable locations and characters (man under bridge, flute boy, death mountain, Mr. bunny, the blind girl, Zora waterfalls), somewhat comical, improved dialogue and visual clues, interesting mechanics (bomb jumping, blocks in third dungeon, hook shot, magic effects, create blocks with a magic cane), travel by bird or warp points in the water, warp out of dungeons (and even boss fights), guards that start attacking Link directly when alerted to his presence (game's a bit inconsistent about what they'll react to though), various control improvements (diagonal movement, strafing with the sword, three kinds of sword attacks, block projectiles with the sword beam), making money is faster than in the first Zelda, more interesting enemies overall, some context sensitivity (flippers/lantern light/glove/boots are all equipped automatically), some sequence breaking is possible using bombs and ramming knockback around pits, teleport around the overworld using whirlpools (and later on the bird) or save & quit (restart at link's house or the sanctuary)

+/-
Very linear first third of the game (unless you can/want to pull off some fairly difficult glitches)
easy to acquire more life (heart containers) and to farm for health early on
holds your hand a lot more than the previous games, can't turn while running (there's a hack that adds this though)
getting hit cancels your sword charge
you can only carry 10 bombs and 30 arrows at first (can be upgraded to 99 fairly soon but it's a somewhat tedious process of throwing 50 rupees at a time in a wishing well)
can't go back into the castle after beating Agahnim, respawn on the spot if you have a fairy in your inventory, no (traditional) dodge move but you can dodge some things by ramming walls, need to find the big key in every dungeon to be able to open the chest to the special item (gets a bit tedious in the long run), static difficulty (dungeons etc. don't become harder depending on how much progress you've made), few uses for some items (net, shovel, quake magic, titan's mitt, hook shot), can't choose not to pick up hearts dropped by bosses

-
Some reused bosses (three big eye creatures)
feels a bit formulaic (after getting your main quest explained to you there isn't much to do besides going from dungeon to dungeon and collecting hearts - no sidequests, only one major twist)
no difficulty options/second quest
can't carry pots etc between screens
somewhat boring dialogue and clichéd plot
​somewhat glitchy AI (soldiers stop noticing you, crows), minor scripting problems (Sahasrahla acts like you've been told about him regardless of if you have or not), backtracking (first dungeon, death mountain, ice dungeon puzzle without the red cane, points of no return in misery mire for example), getting new hearts or special weapons is usually a matter of finding them then using a bomb or the hammer (lack of puzzles or enemy challenges to motivate you into collecting stuff), odd systems for upgrading items and ammo capacity (throw items in a pond to get upgrades for free from a fairy, pay small amounts at a time to another pond fairy to slowly increase capacity), small delay when selecting dialogue options, pretty basic animation, some dead space, can't attack if standing too far into a doorway (edge of the screen), some slowdown, Link is a slow climber (and for some reason you lose control over him when climbing stairs), swamp palace boss is too easy, some gear feels gimmicky (second armor upgrade, titan's mitt, the blue cane), can't use secondary weapons while standing in doorways, too easy to farm for health via anti-fairies in some dungeons (they respawn instantly as you exit the room), somewhat muffled sounding instruments at times, some trial & error (lack of magic potions in some dungeons, eye lasers that shoot through walls while they are off screen, bombs in bushes/enemies under rocks, some boss patterns, dark areas in swamp palace, "I'll give a piece of heart to the person who wears the cape" - and the hook shot apparently, digging up the ocarina, you still pick up bombs/rupees/arrows from chests when you can't carry any more of them, can still get hit by crows when in a tree log tunnel, some bombable walls without clues (generally there's an obvious crack)), dropped items (or ones found in bushes) don't become immediately interactive (breaks flow a bit), some annoying sfx (the beeping that doesn't let up while low on health), can't access the overworld map while in-doors, somewhat slow text speed, some unnecessary road blocks (the dark large boulder near the lost woods warp, large boulder between the village and the southern field/swamp and the rocks in the river path east of the castle), somewhat sluggish dialogue menus, some enemies take too many hits to kill considering their patterns, can't fill your glass bowls with magic dropped from enemies (for example by grabbing a potion with the net), the cane of byrna is kind of redundant (almost the same effect as the cape - you'll be detected but it also damages enemies - however the latter costs magic), the ocarina replaces the shovel (fixed on GBA), no journal/log feature (saving NPC conversation, taking map notes like the stone tablet and heart piece locations)


Notes:
-GBA ver. comparison video: http://www.youtube.com/watch?v=P7_1v2zG6G0&hd=1
-Link can receive a larger reward from stranded fish by carrying them to the Bottle Salesman in Kakariko Village.