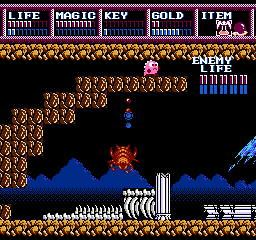 
​
​+
Platform Adventure/Metroid-like gameplay w/ Puzzle and RPG elements (shops and inns in the dungeon, some equipment-based stat upgrades and buffs (power knuckle - 4x AP, shield - projectile attack immunity, fire rod - 2x attack range, jump shoes - 2x jump height (very high with certain chars), temporary invincibility and speed power ups), breakable blocks - some are destroyed by moving into them while others require a mattock (it also destroys the movable blocks), platforming puzzles and some spatial awareness puzzles)
5 different playable chars (switch back at the family house; three different stats which differ for each char (jump height, attack power, attack range), different chars can use different tool items and some have a special inherent ability)
Some interesting abilities and tools (flight (wings item, Meyna only and drains MP) - actually works more like being able walk/climb in mid-air, one char (Pochi the pet monster) won't get attacked by monsters, block moving glove (Xemn/dad only) - lets you push certain blocks into enemies (killing them) as well as rearrange them to progress, hit rod - sends blocks flying and bouncing back and forth a couple of times before disappearing which is similar in purpose to the glove but more limited as you can't slide push them diagonally (Meyna/mom only), armor - partial invincibility+takes out enemies you move into (Xemn and Roas only), key stick - permanent key which drains 1 MP per use (Meyna only))
Warps/fast travel (can use the paintings/pictures to teleport between locations after getting the 4 crowns from bosses (Roas/son only), can also use the crystal balls to warp back to the family house on the surface - one of the first (one way) town portal items in the ARPG genre?, beating a boss also teleports you back to the surface)
Stash/vault at your house and at inns (limited inventory when moving around - only 3 items, have to pay to use it at an inn though)
Elixir can save you from death (Zelda?) and magic bottle refill your MP to full if it runs out - the former needs to be in the active item slot when dying to work
Can stand on enemies to use them as platforms
8-way aiming
Can jump onto and off of ladders (however the control issues make it hard to pull off - see below), Can also jump while climbing to climb faster
Smart bomb (cross) and temporary invincibility (ring)+temporary speed up (scroll) power up items (these trigger upon touch - can't be held onto for later use and they don't last particularly long so you generally won't get the best use out of them, the speed up scroll effect can stack three times and also lowers your AP a bit while in use)
Fairly large arsenal of inventory items and gear (16 different ones in total)
Fast resting at inns
Some sequence breaking possibilities (pochi can ride on some enemies (he doesn't take damage) to for example reach the power knuckle a bit sooner, can use an unintended double jump trick (involves pausing two times during a jump and then holding jump as you unpause the second time - pretty easy to use and is quite useful as it lets you skip or simplify some block puzzles; can also skip buying most items since you can find them instead - seems buying the key stick is faster than finding it though, can skip some of Xemn's block puzzles with Lyll (mattock))
Sometimes teases a later area way before you can reach it (Zelda 1, later done in Super Metroid)
Some shortcuts
Some decent-good block/platforming and spatial awareness puzzles (can slide blocks sideways as well as diagonally from below or above however the block moving controls are pretty bad, can jump onto a platform right above you by jumping one tile away from it and then steering yourself back onto the platform/ledge, spatial: sometimes teases a blocked off item which you find by going to another room and finding the hidden path to it), super fast movement if you pick up more than one scroll (shame you can't make full use of it due to fall damage), pretty good visual variation, shows bosses' health bars (but not enemies'), nice final boss intro

+/-
Partially non-linear structure (can do Xemn's area before Pochi's if you collect the glove first and can skip using Pochi, have to do part of Xemn's area before Meyna's, can partially explore some areas in advance with Pochi; the room with a large dragon painting is a hub connecting to four sub areas designed with one of the playable chars in mind, the sub area boss that you fight is determined by how many crowns you've collected meaning the order is always the same but you can generally choose who to use for each fight as long as you can find/get to a crown with that char, can switch to Meyna after getting the wings as Lyll (or Xemn if you double jumped into her area)? - only Meyna can fly so she has to finish her area, key stick is required in Meyna's area? (and only she can use it))
Password save (can only get a new one at the family home on the surface, no checkpoints or respawns unless you're carrying an elixir)
Ammo/MP-based default attack (the powered boots let you take out enemies like in SMB without spending MP though you don't bounce off of them here - the manual actually depicts that happening)
No exp point leveling system
Kinda weird how you don't get attacked even if you attack the enemies when playing as the monster (also odd how there are monsters near the inns in the dungeon)
Locked doors and chests (gain keys as loot from enemies - pretty common item but the doors respawning causes some issues)
One negative item drop (poison - drains HP once)
Auto-fire as Pochi (can't turn it off)
Super fast falling speed
Can avoid damage from spikes by holding up while moving (unless the space above them is only a single tile high in which case you take damage and also can't cross - have to use the wings here)
No gravity effect on pushable blocks - weird but also creates some interesting puzzles where you build staircases of sorts with blocks
Item drops disappear after about 8 seconds or when moving the screen away from them (oddly enough this timer isn't affected by moving in and out of shops or inns while on the same screen as an item drop)
Can skip finding various tool items if you find a shop that sells them instead
Small sprites/zoomed out view
Weird how you can't fill up your HP or MP to 100% by resting (only about 90)
Block positions reset when re-entering a room - generally good (sometimes a must) but can close some shortcuts again after having opened them (would've been better if you could use an item to destroy shortcut blocking blocks for good or if they were just replaced with breakable ones that stayed removed), can't pull blocks or slide them vertically straight up or down from the side (can do it horizontally from above or below as well as diagonally up or down from the side or above/below), going into an inn or shop doesn't reset the blocks in the current room,

​
Notes:
-Some layout differences between the MSX and NES versions
-Can prevent fall damage by pausing right before landing
-GG codes (remove fall damage): https://gamehacking.org/game/30097
-Beat the first boss as Pochi, second as Xemn, third as Lyll, and fourth as
-Good idea to go back and rest after clearing the path to the fourth boss

Bugs:
-Can avoid damage from spikes by holding up while moving (unless the space above them is only a single tile high)
-Breakable blocks respawn if movable blocks are pushed into the location they were at - no gameplay effect but looks unfinished
-If you jump into an enemy from below then you get semi-stuck inside its sprite - sometimes taking extra damage