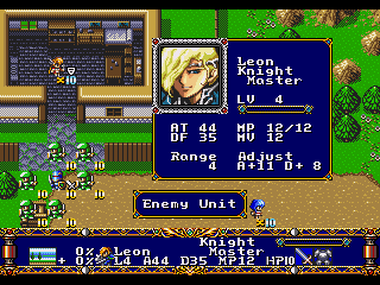 
​
+
Great customization options for your characters
relatively deep combat system (a diverse 5 step class tree with the option to class change using a certain item, terrain effects, morality boost fields, elemental and status spells and attacks, summons)
secret battles and hidden items
improved AI (though less aggresive and still very predictable - for example units won't gang up on a much stronger unit (though there are a few exceptions) and there are still pathfinding problems when using orders)
​good length
​pretty good dialogue (occasionally funny), more strategic than shining force as you get to choose who to bring, hire different troops, buy equipment and survey each battle and deploy before they begin, characters no longer stay dead when beaten in battle (you only lose the exp accumulated in the current scenario), good art direction and use of colour (sometimes displaying more than 64 colours at once)

-
Some trial & error when it comes to character building (some info in the manual?)
somewhat unbalanced characters
game speed is pretty slow even on max speed (emulate)
repetitive in longer sessions (no actual gameplay in between battles besides shopping for and organizing your army)
no more zoomed out view or battle map overview during battle
​you can't retreat and replay a battle to buiild levels (the game gets much harder if you don't know how to build your characters beforehand so you need to be careful about getting all exp you can from each battle - however there is a level select code to help with this if you're stuck), it's tedious to use the rune stones without level skipping (you'll have to be super economical about exp), somewhat unbalanced difficulty curve (gets much easier towards the end if you've built your characters well and didn't miss much exp), final boss is a pansy (can be put to sleep), most summons aren't quite worth the effort (the best one can actually be bought in the first secret level), the sound test is more limited (you have to stay in the menu to keep listening to the selected track)


Comment:
An excellent sequel to the already solid first game of the series (Warsong). New features include a completely overhauled level system, new enemy types, summons, hidden items and levels (with some very... interesting scenarios). The soundtrack is as catchy as ever and now much more varied than before since every general has his/her own theme song. It should be noted that this is pretty much the same game as Der Langrisser for SNES except for a few noteworthy differences. This one has a more cutesy visual style, a higher difficulty, and the option to equip each general with different enemy types. The SNES one on the other hand begins with an Ogre Battle-style character builder (a set of moral choices) and lets you choose between branching paths that affect the story's outcome. It also features a few more music tracks (though not exactly in the best quality for the console). I highly recommend Langrisser II to anyone remotely interested in turn based strategy or jRPG as it is easy to get into while offering more depth than many of its peers.

Alt:
When it comes to SRPGs I think this is as good as it gets for the MD, and it outshines the original (Warsong) in every meaningful way. Very challenging (dead characters stay dead), huge battles, character customization with cool classes like Summoner and Dragon Knight, a decent story with a lot of humour and twists, and excellent music. Only playable in English on an emulator AFAIK, but that's a good thing because you'll want to be able to fastforward after a few battles anyway. Also: Chou Aniki cameo.