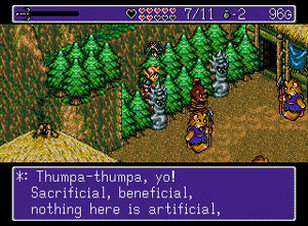 +
Great puzzles and dungeon designs overall
Good dialogue with a lot of humour and a nice rhythm to it
Balanced pacing with a solid amount of side quests
Save feature (four save slots but only one can be used per game)
Pretty fast movement speed
Creates a believable world given the limitations (more so than in Zelda, towns feel alive and dungeons aren't placed right next to them)
The story isn't the typical save the princess fare (you're an adventurer looking for treasure) and doesn't take itself too seriously
Some interesting mechanics (stack boxes and other objects on one another to create stairs, enemies also affect switches, charge attacks, Friday saves you from death as long as you have one or more Eke Eke herbs left, etc.)
Hidden items
Fast travel/teleport system via the big trees (unlocked about halfway through the game)
​
+/-
Final dungeon is a huge maze (there are no dungeon maps like in Zelda)
A bathhouse scene was censored in western releases
Hands out plenty of life containers (life stock) early on
Somewhat limited inventory
Can't carry the island map with you and check it at will
Off screen enemy respawning (usually happens right away unlike in Zelda - can get annoying in dungeons)
Sometimes hard to know where to go next?
​
-
​Lacking controls in some ways (no shadows, lack of friction if standing on an interactive object put on a moving platform means you'll fall off if you don't move with the platform)
Sometimes sloppy hit detection (your sword can hit objects or walls instead of enemies if you stand too close which can get annoying in ambushes and because it's sometimes inconsistent, invisible walls here and there and the game is sometimes inconsistent about which platform edges have them and which ones don't)
Movement controls are weird in that the function of pressing a cardinal direction changes depending on which direction you were previously moving in (if you were moving west by pressing up+left, then pressing down makes you move east; if you were moving north by pressing up+right, then pressing down takes you south instead) - you can override this by always pressing diagonally (two directions) on the d-pad when moving though
Some poor AI (many fights are won by button mashing enemies into a wall)
Some tedious puzzles (pixel perfect jumps, Greenmaze (the gnome that pushes you))
All enemies sound the same (even bubbles scream like humans when killed - and the sample is so-so)
Some backtracking (waterfall shrine early on, after getting the second to last heart in the swamp shrine (have to drop down a floor - game should've spawned a moving platform after opening the chest instead), need to talk to a certain NPC to trigger help from the Gumi tribe to get past the landslide?, don't go to Mercator or the witch's hut before going to Ryuma, missing a certain jump in Destel Cave, etc.)
​Only 1 save-slot per game
Can’t skip the in-game intro cutscenes
Some enemies take too many hits to kill considering their simple behaviour
Can't buy more than one of a certain item at a time
Somewhat dark and high contrast colour palette, need to go into the pause menu to use keys on locked doors
​