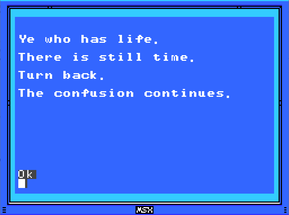 +/-
Partially non-linear structure after the first area (you can explore several areas right away but you'll frequently need one or more items or abilities to make the most out of exploring later areas (plenty of key item gates), surface area eventually connects to 3 dungeon areas, can't explore much of area 4/spring in the sky until after area 2/mausoleum (need helmet from twin labyrinths/area 7 though it can be reached after area 2), can't get to cave of inferno before temple of the sun?, need to get a key from confusion gate to explore most of area 8/endless corridor, need to enter area 4/tower of the goddess via area 6 or after clearing parts of area 5/inferno cavern, can finish chamber of birth/confusion gate/endless corridor in any order?, one optional challenge area, )
Can only save in the beginning town and any collected experience is lost when loading a save (the game doesn't tell you about it beforehand - you do regain your health though); one slot per game only until you get an upgrade (5 slots, only shows date and time of save))
Delay on attacks (see Castlevania - how you fall or get knocked back is also based on CV)
Can attack diagonally upwards and backwards (watch the whip swinging animation)
Off screen enemy respawning in various rooms (sometimes they respawn like this until you've cleared the room and after that they respawn if you move two rooms away or into another area and back - other times they always respawn)
No health drops from enemies (and gaining a full exp bar to regain your health takes pretty long until you get the scripture item in the mid-late game)
Maps need to be used via the in-game laptop (fully upgraded map takes up 2/2 slots and shows exits to other areas, the grail tablet/warp room, the opposite area (rear/front) entrance room and the basic layout; no room topography, no paths between rooms, no chests, no shops, no NPC caves)
Can't run or crouch, Can't dodge (can upgrade movement speed and block most enemy shots with the silver shield/nearly all shots with the angel shield)
Can't walk while attacking
No save points within dungeon areas here
One of the shopkeepers insults you if you don't buy anything or don't have enough money for something (calls you a bitch!)
Used weights disappear visually when reloading but the effect remains (need to keep in mind where you've used one to not waste time getting to a pedestal again)
Some puzzles and mechanics from Zelda (the healing fairies, kill all enemies in a room, jingle when you solve a puzzle (need the shell horn item), reflecting shield puzzle, wizzrobe enemy (tower of druaga?) and how you damage one of the final boss's forms) and King's Valley/Vampire Killer (looping areas), unlockable hard mode though the way to unlock it is odd - have to read a tablet in the mausoleum area twice (reading it once gives you a warning not to read it twice, hard mode=more monsters and monster spawners), swimming takes some getting used to (no buoyancy), can hit enemies through platforms from below, easy mini-boss in area 4, there is an item that plays a jingle when entering a room with a hidden room in it (detector) however a jingle for when there is a puzzle yet solved in a room would've been more useful (since now you pretty much have to kill every enemy in every room and hit walls and statues even if most are traps to be sure that it doesn't unlock something) - see Link's Awakening, can't crush enemies with blocks, don't need book of the dead to unlock the serpent staff here - jump and hit the switch with chain+throwing knife then use grapple, no use for many of the game roms and some combinations are either negative or useless, some hidden developer messages (not useful as hints and getting to them is a lot of work), the silver shield (blocks the red crab-like enemies' shots) has to be used manually as a sub weapon, can't double jump out of water, making the elevator to the mini-boss appear in the twin labyrinths - while there's an OK clue for it the lizard paintings in the background are pretty easy to miss compared to other paintings in the area, several areas having a part which is separate from the rest of the area that can only be accessed via another area can lead to some confusion since you can only view one area map at a time and not see if an exit is one-way only, palenque/chamber of extinction boss goes down pretty quickly with flares and shuriken or bombs (can also increase your invincibility time to make it a pushover), one mini-game is based on Snatcher (a parody dating mini-game that turns into a gallery shooter segment), economy stays relevant throughout the game however the grinding makes this tedious, no move canceling (such as attack animations - sub weapons are used without an animation though), two teleporter mazes, sub weapons don't work against the final boss, automated escape segment after the final boss, a few neutral creatures but they can't be interacted with

​
Bugs:
-Alt+Enter closes the game when going back to fullscreen and then it starts in windowed mode afterwards with a minor graphical glitch (transparent color is shown as dark grey so you get boxes around every sprite)
-Temporary torches lit in dark rooms only last for a few seconds on newer PCs

Notes:
-From the manual: "If you just operate a mechanism without thinking about how it works, you may end up not ever being able to get a specific item. If you think "I'm trapped! I'm going to warp out!" and do so, you won't be able to get back into that room from the outside. Once you do finally manage to find your way back in, you may be confronted with an even more obnoxious mechanism to overcome than before. If you make enough big mistakes it will even become quite tough to complete the game."
-Table texts: https://lamulana.fandom.com/wiki/Text_Dump
-Have to open Joytokey after loading the game or it won't work
-Version differences: https://lamulana-remake.fandom.com/wiki/Change_List
-Missable items (also the life jewel in shrine of the mother): https://gamefaqs.gamespot.com/boards/956920-la-mulana/51388567
-Can get weights from the grey birds on the surface and a pot in area 1
-The fandom wiki is wrong about the 6 pedestals puzzle in confusion gate (the correct order is 534261)
-Remake is less linear according to a YT let's play
-Clear time: 21:55 w/ guides
​