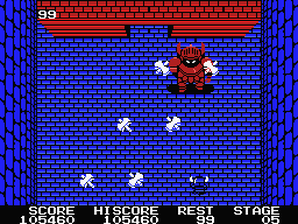 +/- Picking up the shield again while using one doesn't replenish the one you're using, one hit deaths, the red invincibility power up also makes you unable to shoot for ~8 seconds (can make you unable to cross rivers), standing close to what you're shooting at increases your rate of fire, need to shoot item containers several times to destroy them, some item containers create bridges over rivers, no weapon inventory, fairly frequent checkpoints, can't shoot backwards while enemies can, low rate of fire (only three when upgraded),

- No continues and you'll only gain ~9 lives throughout the game (there is at least a 25 lives code), very choppy scrolling, kinda slow paced, hard to recover after death even after just a couple of levels (lose speed and weapon upgrades, checkpoints at boss fights means you can't upgrade during one), the time stopper power up halts the scrolling as well (for ~7 seconds) further slowing the pace down, a bit repetitive, trial & error (looping horizontally sometimes doesn't work, second boss shoots invisible (!) projectiles), no auto-fire, some weapons have a worse second level (spread shot), the boomerang kinda sucks, have to shoot weapon power ups to cycle to the weapon you want and you'll often be distracted by enemies at the same time (similar to Twinbee) - you also need to shoot them three times after each cycle to not just get points instead, invisible wall near the top of the screen, kinda repetitive after a few levels, level 7 boss is just a bunch of knight enemies, no difficulty options