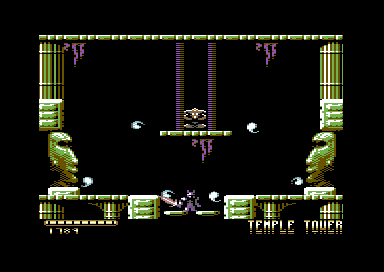 ​
+
Decent map system (auto-mapper which shows the basic room layout and room exits, your location and some in-room walls, shows transitional rooms between areas (loading screens), also shows time taken). Near the end the paths you haven't yet explored are also revealed
Basic gear inventory (sword and armor). Quick select buttons for gear (F1-9)
Get hints and some lore through short rhymes written on stone tablets placed around the game world
Elemental gear (water armor gives protection from blue drops and projectiles for example - generally you equip the corresponding color of armor to defend against a certain enemy/hazard/projectile), enemies have immunities and affinities (?) to some weapon elements)
Platform Adventure-style gameplay (interconnected map, ability gating, gear upgrades, upgradeable life bar, some hidden paths)
Alternate swords (water sword - upwards/lobbing throw arc, )
Good art direction with some large and detailed sprites. Decent animation
Some decent bosses (third area)
A few shortcuts
One two-way teleporter for quick travel (not quite enough but it helps)
Pretty nice cutscene after picking up the holy grail (artwork stills and text
Alternate bad ending if you didn't get the gold armor from the dungeon area

+/-
Mostly linear structure (can only open doors in a specific order in the first area, opens up a bit after getting the double jump in the second area at which points you can get some upgrades in any order but areas are entered and finished in a set order besides the dungeon area, some backtracking to previous sub areas for upgrades, some areas are pretty much linear)
Single entry point to 4/7 areas
Infinite lives
One save point per area which also refills health (none in the first and last though)
Enemies respawn when exiting the room they're in (or sometimes the screen in spots where the game goes flip screen)
Can throw your sword faster by getting closer to the enemy (see Gradius etc)
Sword of fire's throwing arc is identical to the water one's and sword of lightning's, and sword of wind's is the same as sword of earth's
No HP refill after beating a boss
Some cool but no original abilities (double jump, hover jump, break certain walls, flight via eagle transformation)
Coins are only used to be able to wield the gold sword (your supply slowly drains)
No blocking, running or dodging

-
Door switches/crystal balls open specific doors when destroyed but you're not shown which door and they can be pretty far away
Very few save points and no checkpoints - lose all coins after dying and even after reaching a new area you get teleported to the beginning of the game!
Some interface/control issues (very slow horizontal movement, the map doesn't show locked doors+save points+upgrades+the teleporter and you can't place markers on it, up to jump, somewhat floaty jumps, areas all have the same color on the map screen)
No health drops from enemies and item containers containing HP don't respawn - leads to backtracking to save points
Doesn't play music and sfx at the same time (strangely it plays a short tune in each area and then switches to sfx for a bit before going back to the song while in-game)
Some trial & error (water drop hazards are actually enemies that can be killed, point of no return if you enter the holy grail screen to the right of the final boss - alternate bad ending if you didn't get the golden armor from the dungeon)
Various rooms are just long corridors with easy enemies in them and the last area is one long corridor with easy enemies and hazards
Long loading times when starting and when moving between areas
Easy first and third bosses (they're also too similar), pretty easy dungeon boss (dies quickly). Safe spot vs the mini-boss in the archmage pass area and the final boss (boo!)
Some boring backtracking (from the archmage pass to the cube room and then for the flight power to get into the dungeons area)

​
Bugs:
-Sometimes you get a load error when loading the next area and sometimes when resetting and loading your save it hasn't saved all your progress (can use save states in emulation though)