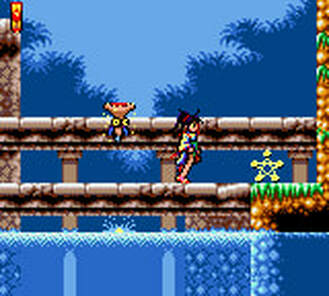 
​
+
Two different chars to switch between (in-between levels, one girl (magic attacks) and one boy (roll and somersault attacks, similar to Sonic) - their different moves mean that they'll take different routes through each level
Some hidden alternate exits
Can exit any level at its entrance
Nice cutscenes (some pretty good voice samples for the system, one scene before each boss)
Some large sprites
Run button (same as attack with the girl though)
Optional mid-level checkpoints (pentagram)
Elemental smart bombs as the girl
Pretty good animation and great use of color overall (the boss fights are a bit worse in this regard)
Minor puzzles (the girl can melt ice with the fire scroll or put out the fire on the burning rolling boulder enemies to use them as platforms for example)
Pretty good bosses overall (some with two forms), new moves during boss fights (can block projectiles and use ranged charge attacks as well as a forward tackle attack which can be used in mid-air (pause to switch attacks), bosses have specific weaknesses to these, can't use roll or somersault attacks here though), can replay most beaten levels (not bosses though), the game shows which levels still have a special symbol item in them if you get to a certain point without collecting them, mini-bosses (very easy though), pretty cool final boss (mixes in some cutscenes - would've been nice if you could deal the final blow manually though)

+/-
Forced collecting of the special symbol items and the seeds
Easy to rack up extra lives
No time limits
Some delay when attacking as the girl
Can't jump down through platforms you can jump up through (not used as a puzzle but sometimes for separating character routes, sometimes it just makes it so you can't backtrack though which is annoying)
Can't use the girl during boss fights
Getting the special symbol items would've been smoother if you could switch chars on the fly (seems only the girl can get these)
Some very short levels
You don't gain any new abilities past the first level
Life refill between levels
Can't upgrade your regular health bar but Zenki's super form health bar is upgraded over the course of the game, no save or password save (unlimited continues though?)

-
Lose the spell you're carrying between levels
Some control issues (somewhat unresponsive movement partially due to lag which gets worse during some boss fights, can't not do a spinning jump as Zenki, hold attack to start running - fine as Zenki but you'll attack as the girl)
Slowdown
Some trial & error (single slot scroll inventory and you can use each one only once (you also can't hold more than one of either type) - in the first level it's harder to hit the barrier enemy blocking the path to a special symbol item with the fire spell, some enemies can't be hit even though it seems like you can (the platform creating pink creatures in level 2 for example), can't look up/down - a few blind jumps)
Repeats some enemies/mini-bosses/tilesets a few times
A bit short
No difficulty options