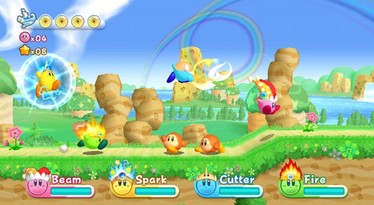 
+
2-4 player co-op (others can join at any point?, camera always focuses on player 1 - smoothly teleports players that fall behind to player 1's location)
Improved variation and distinction between worlds
Very good animation, great art direction overall
Mini-bosses
Optional "dark dimension" areas (unlocked by destroying a certain part of the environment with a stronger kind of ability equipped)
Players can give health to each other (by moving into each other? triggers a kiss or hug animation), new mini-games/challenges (unlocked by collecting cogwheels/energy spheres, these seem to be 1 player only though), fast ladder climbing, replay beaten levels, players 2-4 can choose between four characters (King Dedede, Metaknight, Yellow Kirby, Waddle Dee/spear dude), unlockable hard mode (called extra mode - features some new bosses but other than that it only seems to reduce your HP), places all mini-games and ability rooms in one spot (the Lor Starcutter airship), carry other players, some secrets (harder level 5-5, HAL room, 30 lives bonus in the jump mini-game), little to no slowdown in 2-player, 60 FPS, no more falling over animation when falling from a height?, good final boss (very long and varied fight to do in one go though but if you die after the first form you only have to fight the second), mixes in a shoot 'em up level (ride the second to final boss dragon),

+/-
Ability stars lost when taking a hit now bounce into the edge of the screen as if there was a wall there making them easier to recollect (other players can also grab and carry the star back to the kirby player)
Ability functions can be inconsistent in their efficiency (for example you need to charge up a horizontal shot with the electricity/plasma ability but not vertical ones)
Some moves require shaking the wiimote (not other control methods available - they could've let you use for example the B button instead but at least it's very responsive)
Health items are everywhere early on
Can't switch the camera focus to another player
Some controller sounds, need to unlock the ability rooms by collecting energy spheres now, adds collectable stars (get 100 for a 1-up, the end of level jump mini-game now rewards you with a number of stars according to how high you can bounce), King Dedede and Metaknight are now your allies, missing some abilities from previous games, easy to fly over several segments (only reason not to is that it's kind of slow), rips of kuribo's shoe from SMB3 and the barrels from Sonic/DKC, Kirby's horizontal flight is still pretty slow (Waddle Dee seems to fly better but it also looks weird since he's actually just jumping in mid-air over and over) - for balance purposes but it slows the pace down considerably (levels could've been tweaked for faster flight),

-
Some co-op issues (shared lives, can't keep playing if player 1 dies - everyone goes back to the last checkpoint/beginning and lose their current abilities, can't switch forms until you die as player 2-4 (playing as non-Kirby forms gets old after a while and they're overpowered in some situations, the level 2/strong ability attack animations pause gameplay for several seconds for everyone and can't be skipped, gameplay pauses slightly when players 2-4 die or teleport to player 1)
​still starts off too easy and the challenge is fairly uneven at times (sometimes level designs go back to world 1's simplicity on worlds 2 & 3 or even later)
Some abilities are too similar and some are very situational in use
Some points of no return (makes item collecting more tedious when you can't re-enter a level at a checkpoint chosen by the player and It's fairly easy to accidentally be carrying the wrong ability when you spot an out of reach item (the game does place ability stars here and there in the level to help alleviate the problem but it's not quite enough))
Some levels are too long making it tedious to go for 100% (going to the other dimension and grabbing the gears then continuing the level)
Slow backwards and diagonal movement in the shoot 'em up segment compared to the other directions, no voices for the characters during cutscenes with dialogue, can't skip or speed up the staff roll, no classic controller support