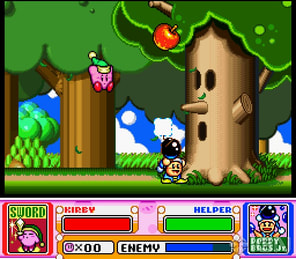 
​
+
Diversity (1 platform game, 1 treasure hunt platform game and 6 mini-games)
great animation
good use of mode 7 (the intro)
great tutorials for each game (and each ability – press start)
more shape-shifting (ninja, fire wizard, bomb chucker, boomerang knight etc)
lots of moves (blocking – l/r, slide, smart bomb, mid-air dash, etc.), 2-player co-op play (or w/ an AI controlled partner), hidden items, secrets, you can give food to your partner (to restore health), cute cutscenes between levels, mini-bosses, Kirby is a fast climber, your partner gets teleported to you if you walk away from it,

-
The standard platform game (spring breeze) is only 4 stages long
slowdown in co-op play
some control problems (somewhat slippery movement, no jump height adjustment, double tap to run instead of a specific button, some movement delay after using a smart bomb)
can’t switch abilities directly with your partner (instead you drop the current ability which your partner can then pick up)
somewhat repetitive
some trial & error (bosses, some aspects of certain abilities, certain obstacles), your AI partner sometimes gets in the way or kills itself, only the platform games have any lasting appeal, searching for the right ability to use to get to a chest can be a chore, ability thieves (annoying enemy),

-
Trial & error (death pits!, the switch puzzle near the beginning makes it seem like you'd need a second player since you can't tell the cpu to stand still but it can be done alone with the hawk form (downward mid-air attack), some bomb blocks create lava barriers in front of chests when triggered, poor overview in the third room makes it easy to miss that the chest will fall into lava if you stand on (thus removing) the falling block beneath the chest, the chest in a stream and the underwater switch which drops a chest into a pit, etc.) - non-persistent rooms means that you can try again if you screw up though
no maps
can't access the pause menu during boss fights
short invincibility time
no teleporters or other forms of quick travel (at the end of some detours you get sent back to the fork in the road though)
​kinda short and re-uses bosses from the main game (spring breeze), very easy minecart segments, ability thieves return (annoying enemy)