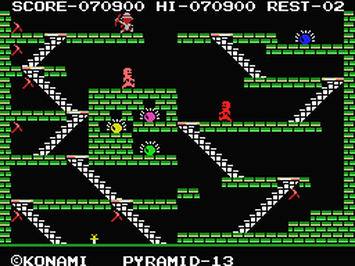 +/-
Can't jump while carrying an item
can move back to a previous level (no point?)
can't perform a melee attack with the swords
enemies respawn pretty quickly after being killed
no time limit?
can get stuck and then you'll have to lose a life to restart the level, no fall damage, forced collecting (of gems/crystals) to progress, pickaxe can dig two blocks downward at once, one hit deaths, can't carry an item from one level to another, can't jump off of or onto stairs, can jump in two blocks tall spaces without bouncing back down but not one block tall spaces, second loop (didn't seem harder? tried one level),

-
No continues
some control issues (the game is oddly picky about how to stand when trying to dig on a single block tile (need to stand at the very outer edge of the platform) - feels like you're solving a puzzle via an oversight, can't throw the sword while on a staircase, when trying to jump to a higher platform you'll fall down if you touch the side of it/the wall unless you hold forward and hug the wall, can’t jump up to a higher platform if there’s a pickaxe there (you’ll grab the axe and fall back down), can't control jump height or length, can't move sideways in mid-air after jumping straight up, fall straight down after moving off of a ledge)
can't drop an item instead of throwing it
some trial & error (can dig horizontally but only at the bottom of a level or when stuck in a "hole" and if there's two blocks on top of each other next to you, hidden traps that change the layout of a room)
repetitive
​no power ups?, level 11 is pretty easy, enemies sometimes linger around one part of a level thereby blocking progression until you move to another screen or take a longer path, no difficulty options