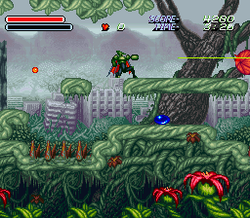 
​
+ Dark and gory anime aesthetic, transform into three different demons, double jump and slide/roll moves, charge shot, dive kick (demon form), difficulty options, plenty of mini-bosses, good bosses overall, extendable HP bar (via points? gives some sense of progression), good enemy variation, some enemies can be eaten (to regain HP) after death when in demon form, fairy companion (extra attack, revives you by sacrificing itself - can then be found again once or twice later on in the game)

+/- Charge shot is rarely useful later on (risky to use since no shot is fired if you let go before fully charging and if you take a hit it is canceled), unlimited continues, can’t save the woman being tortured on the train, no HP shown for mini-bosses while it is shown for main bosses, one can farm for HP at one point in the fire themed stage, boss rush before the final boss (somewhat different patterns, not all bosses are used and only mini-bosses), slide move could’ve had its own button (uses down + jump instead), need to have used all three different demon forms to access the final form (black demon, the game doesn't explain this) and get the good ending

- Some trial & error (green demon’s teleport move (its version of the slide) doesn’t save you from damage like you’d expect, boss patterns, some fast unexpected attacks), tiny graphics, somewhat slow paced (can’t walk while shooting, no run move, many enemies take a few hits to kill), some control problems (no jump height adjustment, small animation after landing when in human form in which you can’t shoot), very easy first half on the final boss (checkpoint right before it), the different demon forms are pretty much the same (the blue one, the dragon seems better because of its faster and wider dive kick move), somewhat short, some annoying sfx (demon shots), somewhat subdued music for the most part, some slowdown