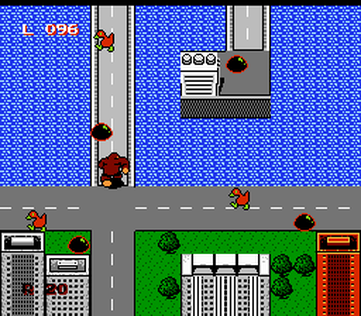 - Trial & error (some one way paths taking you to an earlier part of a world, too many destructible blocks to go through to find an item or door on some screens, lack of directions on where to go next (pretty easy to skip ahead from world 1 to world 5 quickly and you can only backtrack to previous worlds via rare hidden doors), some invisible walls where it looks like there's a screen exit, in the first world you can accidentally move backwards between screens into pits), no maps, so-so sense of progression, fairly repetitive level design (decent enemy variety though), no alternate attack modes or other sub weapons?, no puzzles?, no tools?, bosses go down a bit too quickly if you face them in the right order,