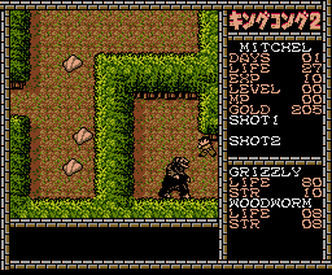 
+ Zelda/Ys-like gameplay (explore a large world for the time, NPCs who give hints and directions, shops, basic character building, overworld and dungeons (cellars) layout, weapon & item inventory), mini-bosses, pretty good enemy variation, save feature (cart combination?), three different endings (use less than 33 continues and spend less than 365 days (~4.6 hours) for the best one, use 33 or more continues but spend less than 365 days for the good one, spend more than 365 days for the worst), can walk away from any dialogue (down), walk on water (water sandals), the game shows enemies' stats as you face them (up to two kinds per screen), some large and detailed sprites, do more damage by attacking from behind? (some enemies can only be hit from behind - Zelda 1), spin attack (via the whirl spell, very strong), partially non-linear

+/- Can use some objects as weapons (big boulder - very situational though as it only damages one enemy type in the first area), loosely based on the 1986 movie King Kong Lives, no HP refill after gaining a level or killing a boss, unlimited continues, days pass very quickly, only way of replenishing MP is to kill one of only two enemy types, modern-ish island setting (similar to an Indiana Jones movie),

- Slow movement until you reach level 20 (can increase speed a little bit every 10th level) – there is a code you can use to start at a higher level though, hit enemies with more than 1 HP don't get stunned, too much grinding for gold/weapons/health restoratives, slow text speed and you can't speed it up, no map feature (nothing in the manual either but you can find one online), very rare health restoratives early on (only one kind of enemy drops them), cheap hits here and there (get poisoned if you enter a certain cabin (no clues given), enemies spawn immediately when entering a screen and sometimes they appear right in front of you, red fishman boss), weapon requirement for damaging certain enemies as well as the bosses in each area, level/strength requirement for gear (can't skip the knife for the axe for example however you get the axe for free later), trial & error (boiled bug and leach sashimi (cheapest food) have no effect and the other food isn’t worth it if there’s an inn nearby, need to kill a bunch of lizards/grass ogres to get the Rod weapon and sometimes need to kill a stronger enemy more than one time to get a tip (in the form of a doll) from it - some of these enemies are also stronger than the mini-bosses, ), somewhat bland backgrounds overall, some quest items don't show on the inventory screen (fixed in a later hack)

Notes:
-Played until the third area (where you can get poisoned)