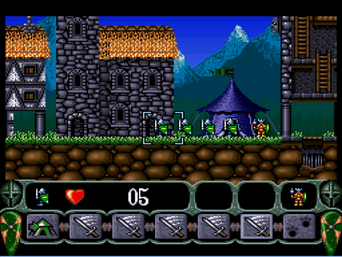 + Pretty intuitive interface, plays like a mix of Lemmings and games like Worms (real time), mouse support (not great though - see below), fire can spread via wood or cloth parts of the scenery, password save, some fun to use weapons and spells (catapult, fire rain, lightning), can queue up more than one command for a unit (making it walk up to and climb a ladder for example), alternate paths through some levels, hold l+r on the controller to scroll freely (or hold RMB with the mouse)

+/- You can make units move back to the tent instantly by scrolling until they're off screen after pressing the tent icon, friendly fire (can't be turned off), corpses don't stay, can't cancel a spell at will (means you sometimes have to wait until one dissipates), units will walk off ledges if you don't queue up other commands, units can't run or duck, cycle through units by holding Y and pressing directions (controller only), barrelmen need to restock after just one barrel (even though it looks like they're still carrying one) and they auto-retreat to the tent after placing one, no checkpoints or saving during a mission, no rankings after beating missions, archers are too strong vs. regular soldiers, wizards die in one hit and are teleported back to the tent after casting just one spell,

- Can't use the controller and mouse at the same time, can't reselect a unit/squad after pressing the tent icon (which makes them return to the tent), can't scroll with the mouse while having the unit selection tab active, training part doesn't explain the icons and mechanics, slow walking speed combined with fairly large levels later on (can move the tent (deployment building) with engineers though as well as use fastforward in emulation), can't tell your archers to just keep firing while you move other troops? (need to select them and hold or mash the button (controller)), with the mouse you have to mash the arrow icon - can't even press it down (this also means you can't scroll the screen to check where the projectiles are going while firing at the same time (sucks!)), can't make archers turn around on the spot?, no need for the pause/paws icon (should've been used to stop all units of a squad in place instead (could've been mapped to select)), gold (used to buy a continue) is pretty much pointless since there's a password system (could've been used to buy units/upgrades/spells instead), some sprite flicker and slow down, so-so animation overall (pretty nice explosions/fire), can't split a group of one unit type during gameplay (to avoid traps for example), trial & error (mechanics, how fire spreads, some traps trigger when picking up gold, etc.), no game speed options, only arthur can pick up keys?, can't tell how much HP a single unit has (need to check the heart?), can't see how many you have left of a unit type in the unit selection tab, no music change in the level complete screen, some archer/lobber enemies can't be reached in some missions (would've been cool if you could blow up buildings or towers),