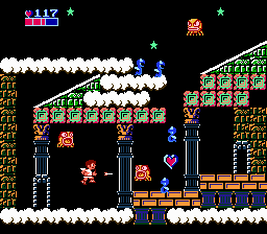 
+
Good variation (vertical/horizontal platforming, dungeon crawling)
Pretty large arsenal of weapons & equipment
Good sense of progression (start in the underworld, finale as an angel in heaven; many levels of upgrades), shops, dungeon maps (have to buy it)
Feathers rescue you from falling down in the vertical segments
Password save
Checkpoints after each section

-
Pretty much reversed difficulty curve (first world is the hardest with few exceptions like the icy segments, the trial rooms also make for big difficulty spikes early on)
Some very annoying enemies (eggplant wiz, thief)
Falling in a vertical level = death
Slippery/awkward controls (small delay when turning around in mid-air, Pit takes an extra step after landing from a jump or releasing the d-pad, can't jump when crouching or target upwards, can't even more while targeting upwards)
Mostly easy bosses (final boss is pathetic if you find the safe spot which is fairly easy to do)
Trial & error (intricate  and unexplained ranking (Strength) system, some platforms are solid while others can be jumped down from by pressing down - meaning you can't duck in parts like the ice stages), makes you wait a lot - avoiding obstacles, timing enemy and trap patterns, waiting for npcs to finish talking, almost impossible to dodge some attacks (eggplant, swarms of spiked globes), climb down a screen using a ladder and you can't climb back up even though Pit is still clinging on to the ladder