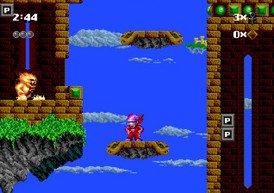 + Good variation, hidden warps, alternate paths through levels, good length, fun transformations, some large sprites, control options, tons of hidden items/warps, some interesting mechanics (flight/fly/x-ray/gravity suits, different block types, grab onto and climb ledges (only as the kid though)), good wall jump mechanics, collectables (diamonds) used to power a strong special attack (A+Start) - different for each transformation and depending on the amount of diamonds (you can repeatedly increase your base health by using 50 diamonds when in Knight form and the effect lasts until you die)

+/- Borrows heavily from Mario and Alex Kidd, Time limit (can be increased by finding clocks, repeating backgrounds and bosses (somewhat ruins the sense of progression/makes you feel lost in a big maze), although it features a relatively intricate scoring system there's not much point in focusing on score (or 100% for that matter) since the game doesn't recognize it beyond giving you one extra life

- No save/password (pretty easy to find extra lives/continues, but given the game length it's still a big minus), trial & error (taking an elevator into a destructible block kills your character, chase sequences, hidden blocks where you were trying to jump, blind jumps, surprise attacks (traps, shots from off screen), boss patterns, some power ups, if you pick up a helmet while another helmet is dropping from a block it disappears), no difficulty options, can't stock up on helmets to use for later somewhat floaty movement, so-so use of the sound chip and color palette, somewhat sloppy hit detection (larger sprites, inconsistency when destroying blocks beneath you and above you - leads to some frustration), limited jump height control, simple and repeated bosses (even the final one is pretty easy compared to some stages), some tedious sections (one where you need very quick and precise downward stabs, parts involving the tank where you need to lose it to be able to progress - otherwise you die), many blocks aren't quite worth getting to due to the time it takes/difficulty of the path (sometimes you'll get several transformation power ups of the same kind in a row which is pointless), overly sensitive/fast controls when using the hover board, throwing an axe right before landing a jump cancels out the axe throw

Notes:
103 levels (some are extremely short though and you won't ever play all of them in a single session)