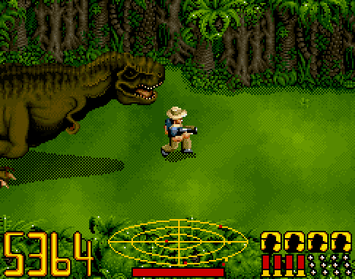 +/- Steep difficulty curve, short descriptions of new dinosaurs' behavior as you encounter them (sadly not that reliable as for example the stampeding dinos still stampede even when you don't shoot), no 2-player, can only play as Grant, collectathon (18 spread out raptor eggs, also need to find batteries for night vision goggles to see in dark rooms in-doors and keycards for locked doors), very limited weapon inventory (you do put down the current weapon when picking up a new one at least), recharging energy-based default weapon (cattle prod), the doesn't really follow the events of the movie much,

- No save feature, so-so framerate in the FPS segments, no in-game maps (there's a basic island map in the manual but it's not that useful), some control/interface issues (no strafing in the FPS segments, the hint pop-ups are distracting (take up most of the screen and don't go away for several seconds while also not pausing gameplay), no mid-air jump control, no dodging/running/blocking, stiff control around wall edges), a bit slow paced, pointless "pick up item" button, can't keep first aid kits for later use, uneven difficulty (the headbutter dinos are pretty tough),