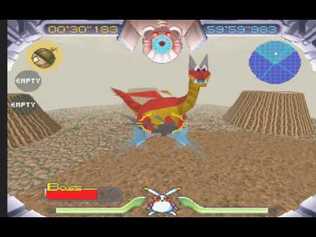 
+ One of the first 3D and FP 3D platformers, strafing (only in mid-air though which makes it hard to dodge enemies in doors) and double jump, look down while jumping, decent art style (kind of similar to Dynamite Headdy), bombs, basic radar system in the GUI, limited invincibility and time freeze power ups, decent bosses overall (with some you can just bounce on and shoot them to death though), skippable cutscenes, save feature (three slots, need to choose "retire" in the pause menu), you can restart levels via the pause menu

- Forced collecting to proceed, control issues (slow turning controls, inconsistent jump controls (can't turn without double jumping and then letting go of the jump button), can't not look down while double jumping without also moving horizontally) - some of these could be done if the game used more buttons (l and triangle for example), plenty of tedious vertical platforming (worst in the ice world), no third person camera angle, no tutorial showing what items do, fog in every level, mostly basic sandbox-like level design, somewhat short jet pod (carrot looking items you need to collect) detector and you can't zoom out the radar, it takes too many shots to activate hidden doors and such and some enemies take too long to kill considering their simple patterns, somewhat sloppy hit detection near walls stopping one of your beams from firing even when it looks like you should be able to, can't skip the score countdown screens (meaning it takes ~14 seconds to start the next level including load times), somewhat bland colors overall, can’t increase your falling speed

Notes:
-Hold R1/2 to look up/down
-Can't update the controls to dual stick in emulation due to how strafing works