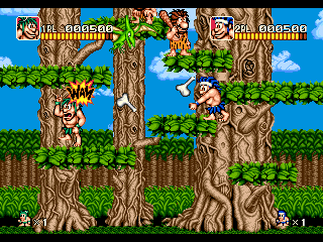 +
2-player co-op
Alternate paths
Charge attacks
Large and fairly detailed bosses (sometimes made up of several different sprites - one of these falls apart piece by piece as you fight it (mammoth))
Shows bosses' healthbars
Ride a dino (one of the river levels)
Two alternate endings (just slightly different joke endings where the girls you saved are replaced by either a fat one or an ugly one - you have to guess by taking one of three paths after the final boss), fairly expressive sprites, difficulty options (bosses seem to act the same and do the same amount of damage on easy as on normal though) and control config, decent variation, somewhat more interesting red t-rex boss fight

+/-
More faithful to the arcade than the SNES version (jump on enemies to kill them and bounce off of them, charge attack, alternate paths, different kinds of attacks do different amounts of damage, etc.)
Slow rate of fire (only 2 projectiles on screen at once, no small ones can be shot if a charged/large shot is on screen)
Can't walk while shooting
No time limit
Can't shoot diagonally (see Contra or GH)
Charged shots would've been more useful in levels if it went through smaller enemies and rocks (there could've been an upgrade for them if you picked the same weapon twice or something)
Health drops disappear after a few seconds, hard or impossible to rack up extra lives?, short levels, life refills after most bosses (not the second to last one), limited continues (up to 4, with 4 lives per continue), no save/password, derivative art direcion (similar to Wonder Boy/Bonk/Adventure Island), unlimited ammo, slow upwards scrolling in vertical levels (makes it so you can't jump past certain challenges), respawn at the beginning of boss fights after dying and even after using a continue (since you lose your current weapon it makes the fights a bit harder), smaller sprites than in ARC & SNES versions (actually helps the gameplay a bit though), no lightning strikes (they were pretty annoying anyway), no "surprised" animation at the start of boss fights (also a good thing, though they could've redesigned it instead so that it doesn't interfere with gameplay)