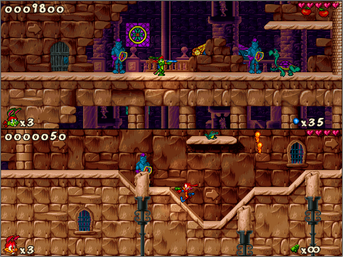 +
Carrots (health) aren't used up when at full health
Transform into the other character once in a while (their different abilites are underused in the levels)
Some good bosses (first one, devil, Robotnik rip-off, final boss)
​Resolution and control options, difficulty options
Save feature (four slots) plus checkpoints
2-player?, weapon inventory and cycling button, hidden items, mid-level shops/bonus boxes (need to explore thoroughly in maze-like levels to buy stuff), bird companion (follows you around and shoots) and floating disk (hover board) are back, two different playable characters (somewhat different move sets), a few nice remixes of classic music tracks and backgrounds, cheesy one liners in-between stages, 2-player co-op (play split screen through the normal game) and vs. party modes, invincibility and shield power ups, includes the demo levels as an extra, weapon upgrades (sometimes marginal changes)

+/-
Borrows heavily from Sonic among others (Yoshi's Island moves, EWJ guns and crows)
Very zoomed out default resolution (makes it easier to react to danger when going fast but also somewhat takes you out of the game - can be adjusted anyway)
It's possible to accelerate mid-jump (Super Meat Boy-ish)
Can't shoot up while moving (can shoot to the sides while moving)
Delay on the air stomp move (but there's invincibility time while charging it which can be exploited on bosses)
Cutscenes are better animated and detailed but still­ look somewhat sloppy (poor backgrounds and lines), focus on collecting generic items (the shops are an improvement to though giving it more meaning), most levels have a maze-like structure, while you can make turtle shells bounce around they don't seem to affect anything, character voices (not constant fortunately)

-
Hit detection bugs (chopper enemies can fall and get stuck in walls, sometimes stomping two blocks or crates at once won’t work, your character won’t shoot his/her weapon if standing next to and facing a crate which is positioned next to a wall, you can get permanently stuck in walls, invisible walls where there's near flat ground, final boss can get stuck outside the screen if you use explosives on him, some enemies can be touched through thin walls or platforms, the spike traps in episode 2, "platforms" in the middle of seemingly flat walls, non-registering tree in the beginning of episode 3 that you're supposed to push to make a bridge and odd animation when pushing blocks on slopes - not a big deal but still)
Small bosses and enemies
Mostly forgettable music
Sometimes lacking or non-existent feedback (killing enemies)
Somewhat finicky float move with a short duration time (which is also set, so it can't be canceled mid-way)
Uneven difficulty (first boss in episode 1 is the toughest), some bland boss and enemy patterns, lacks unique mechanics with any depth to them, some ineffective weapons (rockets shoot at an angle so you don't hit things right in front of you), can't jump down through platforms that can be jumped up through (no good reason for it afaict), when overwriting a save game the game auto-erases the name of the old save, odd water physics (need to counter steer upwards or you'll move diagonally downwards, can't swim near the surface (looks like Jazz drops from the sky when reaching the surface)), some tacky looking effects (speed trail, how enemies explode into confetti, how blocks break), annoying bounce from standing too close to the blast from your own rockets, some annoying points of no return near goodies, can't destroy bee nests?, odd pinball physics, keep jumping by pressing the button (can lead to accidental extra jumps in platform heavy areas), blocks that need 4x hits to break and a delay when swinging around poles (pointless ruiners of flow!), some enemies blend into the background (especially when using the highest resolution), since Jazz has the speed of Sonic but not the spin and somersault attacks you can't get the same flow in this game and movement is somewhat more floaty, the 2nd player bugs out when reaching game over in certain parts in co-op mode (the sprite shows up but isn't controllable when moving on to the next level), final boss bugs out and dies in one hit if you kill the first form by stomping it, can’t replay specific levels with your collection progress saved (the generous save feature helps but due to the points of no return it can get very tedious to try and collect everything)

-JJ2+ fixes some bugs (doesn’t fix the issue of enemies touching through walls/platforms, or not being able to fire when standing right next to and facing a crate next to a wall, or enemies getting stuck in walls, or not being able to stomp two blocks at once and there are still some cases of platforms within walls), increases level editor versatility, improves online stability and adds Turbo difficulty