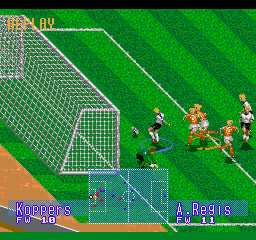 
​
+
Fast and smooth gameplay (generally easy to get a passing chain going and you can press the buttons before a player gets the ball to make immediate passes or shots)
Many options (control config, player stat allocation (9 stats each) - 160 points to spend on the whole team which is enough to boost a few players, automatic/semi-automatic/manually controlled goalie - mode button+y to select, automatic or manual cursor/player switching, toggles for off side/foul/yellow card/overtime (v-goal or overtime) rules, 5 difficulty levels, 3/5/7 mins per game, player handicap (6 levels), number of players per team, goalkeeper AI skill; squad selection, formation, strategy, man to man marking, detailed team color edit mode w/ RGB slider, whole field or on screen only control, 4 options for how the cursor/player switching works)
Many moves (heel lift - release d-pad while dribbling and then quickly press C (very tight timing), can use combos for some advanced moves, high and low lobbing from standing position - high lets you follow with a header, header+jumping header+ header lunge moves, bicycle kick - very hard to pull off unless you lift the ball with the same player though, control over shot/pass strength (hold the button), two kinds of goal shots - hold a+shot for the slide one, regular or lob pass (b/c), regular or lob shot (back+shot while running), delayed passes (hold y) - not that useful?, curve ball? - not sure how) - uses the 6-button controller,
2-player (co-op vs cpu or 1p vs 2p)
Semi-transparent mini-map showing all player positions and which one is being controlled
Six modes (open game (open game/short league/short tournament), scenario (12 different ones of varying difficulty - this means you start in the middle of a match with auto-picked teams), international, penalty kick, world series, training (training/challenge)), replay feature with rewind and pause (skippable), field size and weather options (snowy/fine (sunny)/rainy), very good animation and good voice samples (some voice clips are missing in this version though?, plays sampled sfx while sampled drums are playing)

+/-
There's a couple of feint moves but the most effective one (holding sprint and pressing the opposite direction you're running towards rather than tapping the sprint button) is kind of unresponsive
Seems fairly easy to consistently score goals by doing a sprint shot/sliding shot while on either side of the goal and near the field edge line + very near the goal area line - also seems fairly easy to score when near the corner of the goal area after having moved from in front of the goal a bit further away (45 degree/diagonal shot across the goal area)
Password save
Some pre-rendered elements (part of the intro, goal hug picture on the big screen)
Marks where a mid-air ball is about to land however the camera is a bit slow
A bit sparse but very enthusiastic commentary, fairly easy to lure the opponent goalie towards you followed by a pass to another player and a shot on default difficulty as long as your teammate happens to be positioned properly?

-
Weird how an AI goalie can block but fumble catching a shot ball over and over 3+ times or throw himself after the ball and then immediately do it again before you can shoot again (difficulty level 3, some minor randomization to the ball trajectory or goalie's ability to keep blocking would've fixed the first and some slight delay before a goalie can jump again the second)
Inconsistent AI (sometimes just does nothing when a ball is rolling slowly near a teammate or won't switch to the proper player during an offensive, often doesn't position itself properly for corner kicks or centering lob passes, sometimes seems more like a matter of luck whether you'll score a goal or not during a corner kick - in one instance three kicks in a row toward the goal while very close would not go in but accidentally blocking a defender's shot and having the ball slowly lob over the goalie would)
Some control issues (the camera is a bit too slow considering how zoomed in the visuals are - should've gone to where the ball is about to land instead of following it in mid-air so that you could react better to it, a bit overly sensitive controls for deciding a shot's strength, the player you're controlling sometimes passes to the opponent during a corner kick if you chose to pass, some delay before you stop sprinting after letting go of the button, occasionally inconsistent default aim direction when heading a ball near the goal without pressing the d-pad, sometimes the automatic player switching could've been handled better - can be switched to manual, can't acces the 4 options for how cursor/player switching works during a match nor other control options, can't pick restart match from the pause menu),
Can't remove the timer completely
No in-game tutorial of moves or scoring tactics
Scenario mode could've been more fleshed out, so-so sound design for the music besides the sampled drums, minor slowdown during high shots, could've used a few more colors (uses around ~35-40 out of the max 61)

​
Bugs:
-On rare occasions you can run past the goalie while approaching the goal from the front