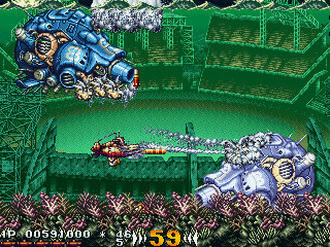 +/- Forgiving hit detection (hit box is noticeably smaller than the ship sprite), secondary weapon acts differently if you're at the surface of the water, respawn on the spot even after using a credit (it seems you get 1-2 power ups shortly after dying to help you recover), limited continues (five - can't gain lives or credits during play), the game generally doesn’t auto-scroll so you can usually take it slow (there are a time limits but they're generally pretty generous)

- Slow ship speed and no way to upgrade it, heavy trial & error (difficulty spike at the second half of the lvl 4/squid boss and at the missiles segment in the final level), no diagonal downward or proper backwards shot, the downward projectiles/sinking bombs (also work as a sort of back attack at times) are very slow, the heavy debris and explosions are pretty distracting at times and it's a bit hard to make out one of the final boss's attacks, somewhat repetitive (re-uses some enemies and hazards throughout, samey color schemes overall), overly loud and somewhat scratchy sfx (no volume controls), a bit short (6 levels or ~30 mins if you don't die), minor slowdown (worse in the Saturn version), only 2 different sub weapons and 3 different main weapons (with 2? levels of upgrades each) and the main ones are pretty similar, safe spot at the lvl 4 boss, bland ending,