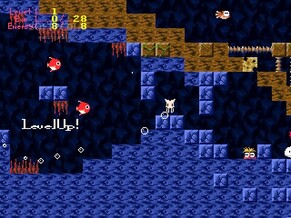 
​
+
Underwater Platform Adventure/ARPG gameplay (level up by eating dead fish or killing enemies - dead fish also restore HP and so does leveling up, gain new moves that let you reach new areas, jellyfish avatar)
Decent art direction
Decent dialogue
Water streams (Ecco the Dolphin; can get through some of them the wrong way with enough speed)
Dash (Ecco/MMX) - have to charge it up here though
Decent boss

+/-
Can't attack enemies at first
Save points which also let you rest to restore health - somewhat frequent (only one save slot though - not just one per game, fast resting)
Fetch quests
Enemies respawn when resting

-
Some control/interface issues (overly floaty movement with slow deceleration when trying to go from moving up to moving down, can't move downwards or sideways normally (the dash lets you move sideways) - only up and diagonally up, kinda stiff movement around walls/blocks, can't skip repeated dialogue, Esc takes you out of the game without warning - there's no main menu in-game (it's in the top left in windowed mode), can't dash diagonally)
Trial & error (rooms where you can get stuck and have to quit, hard to tell the difference between NPCs and and you're expected to go back and forth to talk to various ones)
Slow paced due to the controls and backtracking (boring repeated fetch quest for Ironhead's right hand man, have to go pick up every NPC (even the bad guys) after finding the ship to be able to escape and end the game - no differences in the level design or time limit so it feels pointless)
"This crack is too small to fit through" - Yeah because you're in the way asshole (NPC near beginning - have to explore elsewhere and come back later)
Meh ending
Very short, controlling the ship just feels like regular swimming and it fits into the same tiny spaces, no map

​
Notes:
-Made by the Cave Story developer