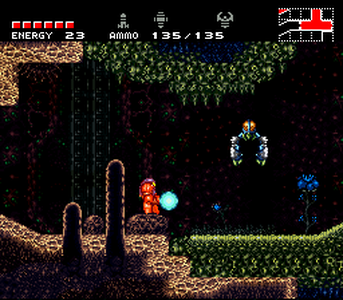 
+
Drastically changed world map (layout, item locations, enemy locations)
New mechanics (pull enemy drops toward you by firing/charging - should've been just charging and have a somewhat shorter range though)
Altered mini-bosses (Kraid no longer drops ammo during the fight, gold torizo is faster and takes more hits while the ceiling is lower, phantoon skips some slower/easier patterns and has a new attack)
The bulk of a new area is shown upon entry on the map but there are plenty of "off map" rooms
Spacer+plasma combo
Uses some project base hack updates (faster map movement?, faster elevators/doors/room transitons, re-spin in mid-air (can be done after falling as well), bomb jump skip (don't bounce from a bomb blast), instant mid-air morph (hold l and press weapon cancel button), run as a ball (speedball - get spring ball) - the times you need this one just feel like another lock to open though, etc.), some nice new artwork for the intro, one missile per door instead of five, nice new surface background (starry night sky), good idea to let the ostrich help you progress while showing how to shinespark, some good new level design elements (destructible robots in the powered down wrecked ship, moving platform robot that falls down when you stand on it in norfair, spinning turtle puzzle in maridia (goes through sand walls and can be manipulated by standing on it), holdout/turret room in tourian), two or three new tilesets (part in norfair near the path to maridia, ) nice speed booster puzzle for gate 08, new escape sequence (longer), new hard versions of enemies (jumpers, metroids),

+/-
Faster auto-fire rate but with much slower projectiles (charge shot is also much slower) - looks and feels weird
Somewhat floaty jumps (same as in the original?)
New "stick to the wall" move when using the grappling hook - cool but kind of redundant since it's a lot easier to bomb jump now and you can often just wall jump normally instead
New backwards flip move (a bit slow since you have to press two buttons (you can start the combo by holding run/A) and backwards while crouching to do it, can't really use it do dodge during battle most of the time, also taught by a tutorial pic imprinted into a foreground wall in-game (inconsistent with the rest of the game)
Can't move while crouching
Can't get up into crouching position from ball form in 2x tiles tall spaces (see ZM), can't switch between missiles and for example the grappling hook while pausing (select button cycles only one way), no jingle+pause when picking up items (fine for missiles but he should've kept the jingle for other items and let players skip it manually), save points are placed where they don't quite fit in at times (off to the side of a large room for example), tourian gate feature (a bunch of locked doors to control progress through the game, need to find spread out switches to unlock them) - only problem is that you're not shown where the door you just unlocked is located (not even in which area or hinted at with some sort of riddle), somersault out of ball mode by holding run and jumping (a bit OP), can't see which items you've picked up on the map or which color doors are (see Fusion/ZM/AM2R), super missiles and power bombs cost more ammo per attack (10/20), buffed high jump boots (again kind of cool but a bit redundant (except for a few rooms) and the speed makes it easy to leap of faith into enemies above you), doesn't point you in the right direction early on (that would make you run into more basic stuff like the bomb and super missile), no teleportation between save points, new ammo system (shared ammo between super and regular missiles), water/lava physics don't affect some ground enemies placed in it, need to beat mini-bosses to unlock metal doors elsewhere in the area, horizontal world loop (norfair-maridia) - but you can only pass through from maridia to norfair?, Kraid no longer drops ammo after the fight (why not after? have to backtrack to get to a farming point or ammo station since the door leading back is locked when you enter the space jump room), interesting but tedious gate 09 shinespark puzzle (need to speed boost and then space jump through a narrow path without hitting walls), longer shinespark charges (used for some obligatory puzzles that can be interesting kind of unintuitive and tedious), beat Dragyon on second try with 410 ammo and 14 e-tanks (might've been interesting to make this boss accessible without the speed booster and you need to know some unintuitive mechanis to get to her), no teleport feature (lots to collect and backtrack for), just barely beat Ridley on my third try with 270 ammo and 10 e-tanks and the plasma beam (hard to say if he's balanced but I'd definitely not want to fight him before the others up to that point), easier to space jump (there is level design built around it though it still makes a lot of parts much easier)

-
Vertical based/contra-style jumps unless you run (with high jump boots you go super fast upwards but the same speed horizontally, they also slow your momentum a bit if you jump without running first) and no auto-run feature
No "hold l or r and press up/down to target up/down" feature (see Fusion and ZM) - could've also let you stand still and target in 8 directions while holding the button (similar to Contra HC)
Too hard to find the first super missile without advanced bomb jumping techniques early on and it leads to backtracking (you go to brinstar to the NW to find the bomb, charge and grapple hook, then have to go all the way back to crateria through some tedious vertical rooms after finding that you can't progress anywhere, then get the varia suit in the wrecked ship, then go to norfair and find and kill crocomire, then finally you can get to one of two accessible super missiles in norfair)
The game could've started you off with at least the ball to flow a bit smoother early on
The "face statues as locks" mechanic (breaks flow, no clues that you can destroy them and it's unintuitive since you couldn't in SM)
Trial & error (some rooms look like they have pits in them when the floor is just put slightly off screen, more advanced shinespark mechanics (can do it while space jumping, can remove blocks below you with your feet but not the ball?, some cheap enemy placements near doors or where you're jumping to, some one way doors and paths (for example doors (one in norfair and one in maridia) which requires a power bomb from one side when you could get to the other side without them, after the gold torizo/chozo statue boss you can't move on without the power bomb (and perhaps the spring ball was intended as well?) but have to leave the boss room and re-enter it to discover that you can go back up again, there's another part in brinstar where a yellow door just gets in the way as well and one in maridia that makes you go back and enter from the wrecked ship to reach the gate 15 switch), some leaps of faith, some boss patterns (can move right through the gold torizo in ball form as well as dodge its destructible balls attack until they blow up), farming points could've been made a bit faster since you take a lot of damage from some things already in brinstar, some odd color choices (change for its own sake), lots of suspicious looking tiles that make you bomb everywhere and then miss that one crack that actually hid something because you got sick of bombing everywhere, the new story kind of sucks (over the top fan fic level revenge story, shoehorns in earlier events probably because they couldn't be removed (stupid how samus would put a science crew at risk when luring the space pirates to her as her "plan")), the intro music doesn't fit in crateria (feels like something epic is about to happen, too short, too tied to the intro cinematic in one's memory), replaced bomb and morph sounds (they're both worse and are taken from elsewhere in the original game), the first mini-boss (ball guardian) easily gets stuck in the left part of the room (could've made the platform there indestructible) - have to lure it out by jumping near it several times, missiles hidden in item capsules (making it look like you've found something more important), some gates in remote and inaccessible locations lead to even more backtracking, phantoon boss is too hard (at 60 missiles and 4 e-tanks w/ wave beam it took me 8 tries or so) and you should be able to save afterwards or at least farm for health more easily, crocomire and botwoon are still easy, gold torizo is too hard (at 5 e-tanks and 135 missiles), the tougher enemies on the western path to ridley could be placed a bit sooner so that you don't move all the way through norfair and then have to backtrack to get upgrades (or there could be a yellow door or gate blocking the way, or you could move to the wrecked ship via maridia), annoyingly hard shortcut through the middle of norfair, minor scrolling issues (leads to more cheap hits), can't get out of the ball form in two rooms in norfair (gate 08, northwestern super missile) - really throws off your timing in the latter, the plant boss no longer turns to stone, the final boss and area are pretty much the same as in SM (keeps the giant metroid and its involvement in the final fight),