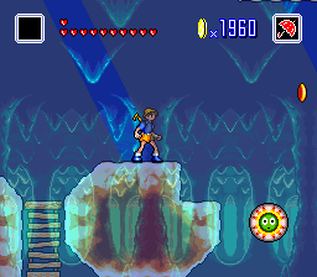 
+
Switch between chars on the fly with l/r after you've recruited them (these have unique abilites: bonto/bird - double jump, saki/girl - wall jump and slide (barely needed after you can climb though); recruiting is automatic) - have to be standing on the ground though
RPG elements (TD view town exploration and NPC dialogue (barely any dialogue choices though), shops, stat progression via power ups - str/def/hp)
​Hub map (similar to Popful Mail)
Your umbrella gets upgraded over the course of the game with new moves (hook swing, glide/hover jump, wall climb - not sure how it uses the umbrella though, mid-air stomp attack, walk over spikes - just makes the late game easier though so it's kinda lame, ice attack - freeze some enemies and certain block tiles (similar to MM1 or Metroid, can pick up and throw/put frozen enemies here as well), wind attack - turn enemies into green orbs that you can throw further than the ice blocks and in more directions, fire attack - the orb spins around you until near an enemy at which point it homes in on the enemy, water attack - the orbs spin around you as a protective shield, thunder attack - the orbs move in a zig zag pattern when shot but can only be shot forward (meh), cloud attack - picked up orbs spin outwardly and disappear near the screen edge (hitting enemies on the way out, also meh))
Pretty fast movement in the TD segments
Pretty good animation and dialogue portraits are also animated
Can teleport to the hub map with the jewel item (even during boss fights) - not from within towns though, levels with treasure left in them are marked on the map, can speed up dialogue on a per text box basis, life restoration upon death item (like fairies in Zelda, can carry one at a time), temporary invincibility power ups (can only be found in some levels and they'll activate when touched), pretty fast resting and saving, some interesting storytelling (fourth wall breaking joke, interactive flashback (play as Viper here)), the villain joins you temporarily as a playable char, some good bosses (the spinning boss in the cell), some interesting level design (the part where you push a structure to change the topography of a platforming segment - very easy though, the royal tomb part with the shining light (works like the x-ray beam in Super Metroid), ), some hidden items,

+/-
Signs used for move tutorials early on (SMW - overly obvious at times)
Mostly linear structure (can revisit beaten levels to grind for money)
Can only carry one potion (any type) at first - need to find empty bottles to carry more (no need to get anything but health potions early on)
Shared health (and stats) between chars
Pretty lighthearted and wacky tone with some silly humour
Ice blocks don't melt from fire hazards, frozen enemies disappear after the ice block (or wind orb) melts, a lot of chests are very easy to get to, one female party members and two female (one is a transvestite? refered to as male in-game) villains and the party member sacrifices herself for the hero at one point, unlimited lives, one save slot per game, status effects affect the whole party and won't wear off until cured, quiz mini-game (pretty easy) and rock paper scissors mini-game (random), boss gauntlet before the final boss,

-
​Slow walking speed in the sidescrolling segments for the first few levels and then the running upgrade is mapped to the attack button which is a bit awkward and means you can't run while carrying an ice block (it also doesn't make all other chars able to run)
Some trial & error (can't look up/down, some boss patterns, )
Mostly uninteractive environments in the TD segments but the game still expects you to search almost every object as there are some hidden items in each town which are not in the chests
Enemies respawn immediately when moving away from their spawning point (sometimes even if just standing still if they spawned off screen) - kind of annoying since they don't drop anything
Some control issues (the homing fire shot sometimes picks a target you didn't want to hit, can't switch chars with l/r on the train, kinda slow swimming, somewhat slow shop interface - should've showed item names right away and made the explanations optional, fairly high minimum jump height)
Pretty cliché story (borrows from Ultima or Alice in Wonderland?, some fun moments though), some plot oddities (the hero doesn't care about one stranger tagging along at Makashigi but then it's too dangerous for the other one that wants to, hero immediately trusts the scientist near the oasis, you don't get to see what the hero's real life was like), somewhat glitchy physics in the tower cave when sliding in tight spaces, sometimes uneven difficulty (lame final boss - pretty easy with a couple of potions and you don't get to use any special abilites or attacks against it, acid sea/snatchaway forest/road to oasis are very short and easy, the control tower boss is pretty easy, ), you gain a lot more money than you'll need to spend, repeats some enemy types a lot, no need to go use new tools in older areas to reach chests or upgrades, sometimes uneven visual quality (the tomb boss and absolute final boss look a bit subpar for example while some backgrounds and the portraits look rather nice), 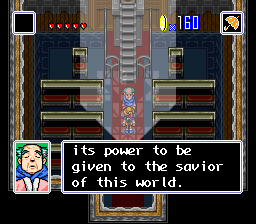 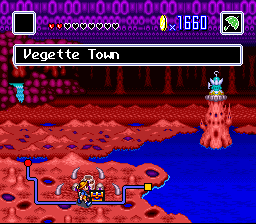 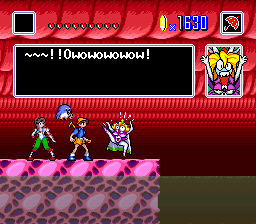 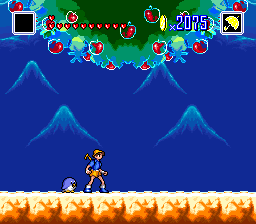 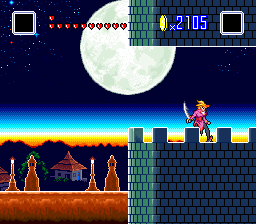 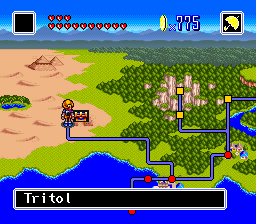