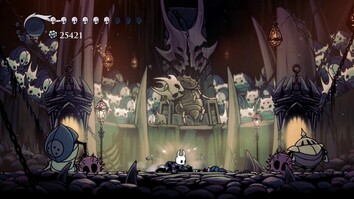 
​
+
Super Metroid/Monster World/Aria of Sorrow/MMX-style gameplay (ARPG/platform adventure, breakable walls, up- and downstab (can pogo jump/bounce on enemies), wall jumping, ground- and air dashing, charge attacks, fast movement)
Great art direction and animation overall
Some nice visuals effects (lighting)
Great mid-air control
Good clues for most hidden paths (some audio cues such as from the imprisoned larva kids)
Teleporters/quick travel system (1-2 per area, placeable warp point gained later on)
Pretty good writing in terms of dialogue
Very good bosses overall (mantis lords!, the radiance, most have a second phase or some sort of escalation, fight alongside an NPC vs the fog canyon boss)
Mini-bosses (can escape from some of these (they regenerate) but not regular bosses)
​Does a pretty good job of making you feel vulnerable despite the nimble avatar (but rarely alone thanks to a variety of friendly NPCs)
Arena/colosseum (good for grinding), well made gothic insect theme (many insects are anthropomorphized), very large game world for the genre, unlockable challenge mode (Steel Soul mode, see below), optional bosses, bestiary (have to grind a bit to get the full info on most enemies though), basic bank feature (some ways into the game though, can only store 4.5k, no interest?, can't borrow money), some interesting enemy design (the small bugs that disguise as larger ones, the retaliating jellyfish, ), have to consider which charms to equip for a given situation as you only have a few active slots/notches for them (generally good but it's annoying how pretty much necessary items like the compass take up slots, can only switch at benches as well), some nice worldbuilding touches (mantis enemies won't attack unless provoked after you beat the mantis lords), some interesting items/charms (some crazy combos - see vid below, defender - cloud that can kill tiny enemies (situational) and be combined with a hatchling spawning item (cpu allies), fury of the fallen - do more damage while low on HP, some charms affect each other (see a guide), lifeblood - temporary extra HP (like the cocoons), grubsong - gain MP/soul from taking damage, shape of unn - temporary mini form (can't jump or use other movement abilites though), hiveblood/kingsoul - HP and MP regen respectively, elegy - fire sword beams while at full HP (Zelda), some items make certain enemies passive (hiveblood, void heart)), some nice (but short) cutscenes, mind reading with the dream nail (NPCs, enemies (excluding Warrior Dreams), some statues and corpses; generally not that interesting though) - when used on ghost NPCs it extracts essence from them which is used to unlock various things, unlockable placeable warp point (dream gate - 900 essence required and each warp consumes 1 essence though; similar to Exile (AMI/C64)), made up language for NPCs (they tend to speak a few words but the rest is just text - good for flavor and doesn't get annoying save for a few situations (the charm shop and using the bench outside of it for example)), some sequence breaking possibilities (can jump a bit further by using the recoil from the projectile spell, can bounce on spikes with your sword/nail, can bounce on a projectile and its explosion to reach the mantis village sooner - advanced, can use your ghost to get to the blue lake sooner - advanced, etc.), having to hit enemies to restore MP keeps the intensity pretty high overall (can restore it in with items later on (as well as at springs but those are very rare)), mostly rewarding optional exploration (can sometimes be hard to tell which paths are optional though), some dynamic music transitions to accentuate the mood for a certain part of an area (in most cases the game just fades pieces in/out between areas though), partial world change (area 1/crossroads gradually gets more corrupted as you break the seals to the final area and two NPCs end up corrupted), some good platforming puzzles (the game is generally more combat focused), can hit some enemy projectiles and make them fly in the direction you hit them in (can't damage the enemy with them though), risk and reward "overcharm" mechanic (can equip an item which takes up more slots than you have left by attempting it several times but you'll also take double damage until going back to using just the slots you have), can get a small discount from one shopkeeper by equipping the defender item (not explained by the game), nice visual transitions between areas, multiple endings (but no happy endings in the traditional sense), some memorable characters (the last stag, ogrim/dung defender, hornet, quirrel, cornifer),

+/-
More open-ended and less guided than Super Metroid for example (some soft gating via difficult bosses/enemies and expensive items (the first key and a mascot which also lights up your immediate surroundings - grinding instead of proceeding as intended and beating bosses is pretty slow and boring though)
Some one way paths in the short beginning area and later on
Save points (benches - these also restore HP (and MP as well if you collect all charms and buy the blessing)) and a few MP restoring springs - can actually save your current progress anywhere but you'll respawn at the last bench you sat on
Starts out relatively tough (harder than SM/SotN/Cave Story - a bit more handholding so you don't go die to the first mini-boss instead of finding the first map and the quick travel system would've been good, the somewhat slow attack speed makes just regular enemies early on relatively tricky to fight - can't be upgraded until mid-game, not much HP regained from the first couple of mini-bosses, can take only 5 hits at first (can use a heal spell almost from the get go but it's a bit clunky))
Silent protagonist and the premise is rather similar to Dark Souls
Falling into spikes or lethal liquids makes you respawn near them and only lose 1 hp
Only one save slot per game
Your avatar can't run while in towns (only makes a slight difference for your movement speed though)
Can't see bosses' HP
Temporary hit point mechanic (gained from cocoons which there are about 1 per area of) - two issues with it are that you sometimes (first area for example) can't carry the extra HP to another area and if you save they are lost as well so they're not worth going back for (you also find a purchaseable item that has the same effect after a while though it takes up two slots)
Upgradeable weapon length (takes up a slot), can't jump nor attack while dashing (see MMX) - can turn the dash into an attack with an item in the late-game, Void Heart item replaces Kingsoul and can't be unequipped (unlocks 4 endings and has some other useful effects, doesn't use any slots/notches), can hit several enemies from a safety through walls, can't duck (your avatar is rather short though), heavily based on Super Metroid and the Alien movies in some ways (crystal heart=easier to pull off but less flexible shine spark, greenpath=brinstar, certain enemies act the same, use some enemies as platforms / aesthetics and atmosphere in some areas), optional collectathon elements (2400 essence pieces for the dream nail/sword - unlocks a placeable warp point (dream gate - 900 required)+bosses+void heart (unlocks 4 alternate endings)+lore from some NPCs+white palace and godhome areas+grimm troupe DLC content, 46 grubs/larva kids - money and a couple of items, finding Mr. Mushroom in 7 spots with the spore charm equipped - additional ending scene), the game doesn't pause when viewing the map via the menu screen, a lot of the story and lore is told through short notes on tablets and in the bestiary given by an NPC - you'll have to be very thorough to find enough to make sense of it and even then there are several things left unexplained (although leaving some things open for interpretation is good the developers themselves seem unsure about various things which makes it seem a bit unfinished in addition to being vague; how was hornet made?, what is the protagonist knight's motivation and real nature (and isn't it "impure" like the other vessels)?, is the seer trying to help you or the radiance?, is the void ending good or bad?, etc.), you'll perform euthanasia at three points in the game to break a seal and reach the final area (then the nailsmith asks you to kill him as well after fully upgrading the nail for some reason but you can at least choose not to), no penalty for killing neutral creatures like the birds or the servants in the white palace, optional escort mission of sorts (carry a flower without being hit or using quick travel across half the world for 1/3 of a HP - hard), can't move through enemies during invincibility time and you'll take another hit if being knocked into spikes by an enemy, can only sell one sellable item at a time (kind of makes sense since the historian comments on each one but sometimes the comments are identical), no slopes in the level design besides some very steep walls which you can't stand on or grab onto (while it looks like there's a couple minor ones near the Blue Lake on the map they aren't there in-game), static difficulty (can make some segments a lot easier or harder depending on the order you do things in and if you fully upgrade your sword/spells and health (takes some effort though, especially health) then most late game bosses become kind of easy), can't talk the banker into giving back the money she stole or make her apologize (only slowly knock it out of her at the pleasure house which takes a while if she stole a lot, you do get some extra money as well though), the protagonist is a genderless vessel made for sealing the main villain (inside it is a ghost of sorts (a "shade" made of a substance called "void" which is implied to have been combined with something else outside of the kingdom of the game world before the game starts)), charge attacks are tricky to use against bosses without the charge speed upgrade charm which you get in the late game,  upgraded nails/swords look and sound the same in-game, no sword combos, can parry sword attacks with your sword by attacking at the same time as an enemy but it doesn't give you an advantage in combat, abyss shriek is pretty OP (optional late game ability though)