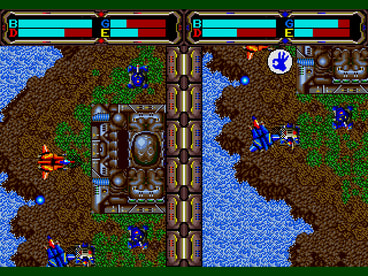 
+
One of the first RTS games
mini-map (on the pause screen only though, switch between seeing the map with bases and enemy commander or a zoomed in view showing nearby units relative to the commander)
9 unit types including the commander avatar
transforming commander mech (plane or ground trooper) - this unit transports and gives orders to all other units and can resupply+repair itself by hovering over any controlled base
pretty fast paced (units are picked up and dropped quickly, fast commander movement, each captured base acts as the main base for the purpose of picking up finished units with the commander, there's also a hack that cuts unit and command costs in half)
capture neutral bases to increase income over time, decide unit command/behavior before building it (can be edited for a built unit by picking it up), max 50 units per side, can repair units, base attacked and homing missiles warning symbols, air+ground+water units, turrets which can be transported to where you want them at any point, some queued commands order (destroy nearest enemy then go take over/guard the nearest neutral base - AT-101, hunt down attacking enemies then return to position - DF-F02A, take over nearest neutral or enemy base or attack enemy if there are none (infantry only and the other command is cheaper plus it generally works the same) - AT-101H), password save (in-between maps only), 8 different maps, choose your path (level select screen), 2-player vs. mode w/ split-screen (can also pick split-screen in SP mode), can change a unit's command by picking it up and going into the menu, pretty good enemy commander AI, low and high ground, patrol move (unit moves in a circle - not that useful here though) and attack enemy main base move (makes the unit ignore enemies), difficulty options (Type A-Type D - only affects enemy starting units?), 16-way fire (can't stop at 30 degree angles though and can't strafe),

+/-
Ammo-based weapons and fuel-based movement for all units (drains quickly when transporting units - if it's completely drained the carried unit is lost when the commander is teleported back to the main base, need to drop supply trucks near other units to resupply them - the trucks do move towards allied units given the right command)
no fog of war
automated resource collection
no building queues
have to pick up and drop each finished unit for it to start carrying out its order
unit commands (besides the jet/commander) cost resources, no base building, can't transform the commander into a boat, can't access the main menu while the commander is destroyed, friendly fire (can't be turned off), no "all units do x" commands, only infantry can capture bases and remove enemy infantry from inside a neutral base, non-turret units are pretty slow to react to the mech, units will slide around on both some ice and snow terrain on the winter map, some maps give an advantage to the enemy, the AI builds and gains resources faster than you do?, no auto-fire (the AI fires very quickly), no fuel/energy loss if you keep the commander jet completely still, can't repair the main base (can eventually (generally takes 16+ minutes) beat the AI in any level by repeatedly dropping tanks with an "attack main base" command on the same side of the enemy base and taking out the enemies there as it won't efficiently move new ones there to defend better), you can abuse how the enemy AI prioritizes going for your commander with its commander when it's nearby by transforming over and over after dropping a unit with an "attack main base" command near its base (in some levels you can even make it unable to land) - works better on lower difficulties, start with all units available (little sense of progression but more freedom),

-
Some interface/control issues (not enough of a warning when a unit is out of fuel or ammo, units move right into lava and die in the volcano level, supply trucks move into low ground too easily (and they can't get back up so you have to babysit them in certain maps), the game is overly picky about positioning when trying to pick up units (and the button is the same as for transforming into mech form) or land certain units such as the supply truck which has a rather big hit box, can get stuck on ledges in mech form, can't build more than one unit at a time (hard to spend as much as you gain in the late-game), can't cancel a unit you've started or finished producing, annoying how the commander mech stops every time you make a turn and is slow to turn around (walks backwards for a couple of steps if you start moving in the opposite direction to the one its facing), too easy to get stuck on other units and to fall down ledges in mech form, can't access the main menu while transporting a unit, switching to a unit that can't be given certain commands makes the game select another command and your previous selection isn't saved when going back to a unit that can be given the command you wanted)
units that can't climb ledges will still drop off of ledges into low ground areas and get stuck there
trial & error (learning what each unit is and each command does - check the manual, )
no story and no persistent elements (troops or resources carying over to the next level)
turrets are a bit OP (5 placed near a main base will keep killing an enemy commander as it spawns)
​slowdown (pretty noticeable at ~40+ total units), boats kinda suck (slow to build, slow movement, can't be resupplied), the AI commander sometimes stops to give unit commands in the middle of a duel (happens very rarely though), somewhat loose scrolling (if you move south a bit and stop then it's harder to react to attacks from the north and vice versa until you manually adjust the camera), enemy unit reaction range is pretty short and the AI won't send all of its defending units towards your base(s) when pressured, the enemy AI can sometimes get confused by the terrain in the winter level, the enemy AI sometimes wastes units by transporting them until its commander's fuel is gone, need to beat all levels on the highest difficulty to see an ending and it's not that good (the story is kind of charming in a silly way though), no intro story in-game,

​
Comment:
One of the most creative console games of 1989, Herzog Zwei is a fast paced RTS which puts the typical off-screen commander role into an on-screen mech avatar and focuses on grabbing bases to increase production and eventually overpower your opponent (it's similar to Dawn of War but more stripped down). It holds up surprisingly well besides some control/interface and enemy AI issues, but those weren't really improved in a big way until the mid 90s for this genre and the latter isn't much of an issue in 2-player vs mode. It's a real shame this game didn't sell and was a one off for Technosoft, although there was apparently a spiritual sequel of sorts made recently by a different dev that I haven't tried yet. The music is also great, and I've actually covered one of the tracks as a request on [url=https://www.youtube.com/watch?v=mvnsC6CiOMc]my YT channel[/url].

Beat all the maps on A type (easy/default) difficulty and about half on B type.