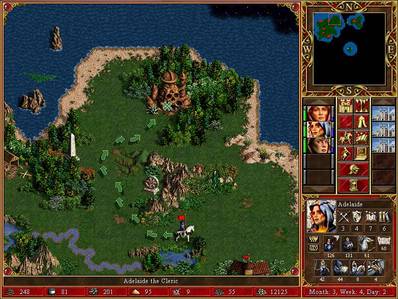 
​
+
Great interface overall
effectively mixes town simulation with exporation and turn based battles
tons and tons of content (different heroes, skills, spells, artifacts, map encounters)
multiplayer (with save feature, teams or free for all)
save/load anywhere outside battle
three long campaigns (+2 expansions available with new units and campaigns), auto battle, speed options, difficulty options, some advanced features (terrain effects, diplomacy, moral and luck bonuses, artillery for siege battles, teleporters), decent art direction (not so much in the expansion packs), minor sidequests (fetch quests), lots of customization (skills, spells and artifacts, troop types, upgrades), 8 diverse factions to play as with many unique strategies, trade resources with allied players, cool spells (clone, forcefield, town portal, summon boat, sacrifice, resurrect), fund transfers between players in multiplayer, decent cutscenes in campaign mode (RoE ending looks a bit silly though), very addictive
​
+/-
Huge timesink (especially in multiplayer)
it takes long to learn how to play well
the heroes play a supporting role (casting spells, buffing/debuffing, moral) and aren't manually controllable in battle
quite micromanagement heavy (need to keep visiting map locations with your heroes for weekly bonuses and troop dwellings, also need to trade for different resources from time to time)
Rampart can actually increase money for allies using its 10% interest building on day 7
armageddon spell (wastes huge armies with little effort), luck plays a big role (what scholars and witch hut locations will teach, some luck/morale/movement locations, spell selection in a mage guild is semi-random, which heroes come up in the tavern (only 2 per week unless you recruit and dismiss on purpose), which artifacts you find, morale (=extra move for a unit which can pretty much turn the tide in a battle) and luck bonuses in battle, terrain layout), mass versions of spells replace regular versions (slow/haste - might've been better to have them separate with different spell costs)

-
Heroes and artifacts usually don't carry over to the next scenario in single player (the game can be pretty vague about this)
some near useless skills (scouting, eagle eye, learning, navigation) meaning some heroes are worse (and hero selection is close to random)
no "buy all" button in the fort nor a "transform all resources" button in the marketplace
campaign gets repetitive after a while (destroy enemy, capture location, save town are the usual missions)
can't throw away artifacts or disown a town (only becomes a problem during the final Seeds of Discontent scenario)
​the story isn't as engaging as it could be (little to no focus on characters, so-so sense of progression (second scenario as Castle you get a ton of angels, next scenario you're rescuing Griffons as if they're the best asset thus far)), some towns can't get some spells in their guilds (you can still learn them via other towns), uneven difficulty in campaign mode (Seeds of Discontent is very easy overall), some factions are under/overpowered or severely limited strategy-wise in multiplayer (Stronghold, Fortress/Castle, Conflux; using the Rampart treasury in multiplayer team games, Master Gremlin rush, Efreet etc.), some interface problems (can't trade between heroes while both are in a town, trading troops between heroes could be faster, sometimes unit graphics cover up their numbers stat when in battle), trial & error (mechanics - how retreating works, ambushes, placement quirks in sieges, how to get certain spells, which skills are useful etc.), unit animations look a bit silly, somewhat archaic battle message interface - since it shows only one line it's hard to follow on higher speeds, no detailed view of stats on bonuses chosen before a scenario (heroes, artifacts, troops), ambushes (campaign) or info on which one to use, can't force ranged units into melee (need to walk up next to enemy thus wasting one turn), some spells become seriously overpowered at expert level (mass slow/haste) while others do not evolve enough, voices for creatures in battle sometimes don't fit (elves sound like trolls)


Some bugs:
In multiplayer, when it's your opponent's turn, click in the bottom-right corner box where you see his flag.
You'll see how many towns he has and of what hall type (village hall, town hall, city hall, capitol).
; movement speed affected by slow troops can be avoided by leaving them in town overnight and then picking them up again
; Artifact bonuses for movement are added at the beginning of a day and you can switch the artifact without losing the bonus
: Devil special (-1 luck?) doesn't work as there are no 'unlucky' attacks
Disguise spell?
Badge of Courage has the wrong description (it actually makes creatures immune to mind spells)
A few items and locations in campaign mode only have their graphics inserted - you can't interact with them