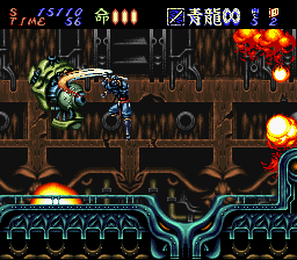 +/- Time limit, no run move (your character does run during in-game cutscenes), invincibility to some projectiles during a somersault, start with only 3 HP after death, mostly ammo based weapons, most weapons can't be targeted upwards, air dash has a certain timing to it (Shinobi-style), somersaulting/wheeling takes some getting used to (forward movement makes you perform a three step charge while jumping progressively higher, backwards movement can be continued until hitting a wall), borrows heavily from Shinobi, move/slide/somersault through enemies when they're not attacking, can't cancel a charging somersault move (makes it cumbersome to time correctly), air dashing into a wall makes you wall bounce automatically (takes some getting used to), fairly easy to rack up lives,