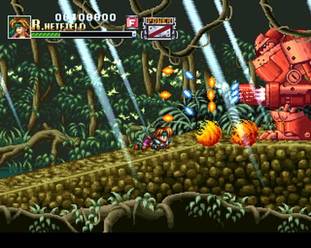 
​
+ Gameplay/weapons/style borrows heavily from Gunstar Heroes (and some from RKA + MMX series (second level chameleon boss and third level mini-boss respectively), very good bosses overall (often with many different patterns), pretty good variation overall (mixes in a shooter level towards the end), slide move, grappling hook (works sort of like in Bionic Commando or Super Turrican 2 except you can't keep hanging in the same place and it throws you up above platforms that can be jumped through), fairly frequent checkpoints, tons of sprites and effects on screen without slowdown, some large and detailed sprites, cool weapon effects here and there, weapon inventory (you never lose any weapons - only weapon power), locked or free targeting modes (hold or let go of L2), smart bombs (oddly enough there's no invincibility while it happens and it doesn't stop boss projectiles but its effect nearly obscures everything on screen), mini-bosses (2 per level), 4 unique weapons per character, bosses are weak to certain weapons?, two different soundtracks, optional voice acting, control config, eight way targeting (need to jump to shoot downwards though), unlimite continues (start at the beginning of the current level)

+/- While some segments are overwhelming on first try they become very easy as soon as you know the pattern, interesting but poorly balanced weapon power mechanic (collect jewels from enemies for power that slowly drains constantly - can't reach maximum level without the rare boost power up and power keeps draining without you shooting and during most pauses in the action as well (should've been better balanced as sometimes you get lots of jewels and sometimes almost none)), one male and one female protagonist (Ruka seems like the better of the two because of her stronger weapons), very short and somewhat bland (repeated character portraits over plain backgrounds) dialogue scenes between levels, it seems nearly impossible to avoid damage in some cases (however regular enemy attacks also tend to do very little damage per hit), no temporary shield power ups, fairly long for a run 'n gun (~50 mins to play through without deaths), short invincibility time while using the grapple hook (needed at two points towards the end but it's sometimes overpowered otherwise)

- No 2-player co-op!, Trial & error (boss patterns can be hard to read, some things can be slided through or bumped into while other things do damage, attacks from all sides), can't map the dodge move to its own button, steep difficulty curve (starts out very easy then gets pretty hard already by the second level), no difficulty options, sometimes sloppy hit detection (generally a bit forgiving though), somewhat generic art direction overall, forgettable music overall (BGM A), mostly subdued and somewhat muffled sfx (can't change the sfx/ost volume balance), most levels are just long horizontal stretches, mostly underused grappling hook, health and bomb power ups are rare and sometimes easily missable (would've preferred if you got either HP or a bomb for each beaten boss), can't see how many lives you have left while in-game, can't choose your own path through the game (like in GH or MM), Axel's homing weapon seems underpowered for the most part, the moving flashlights in level 1 (while a nice effect) would've been more interesting if they triggered something when walked into, ugly english font at the end of levels, lame intro and ending, no sfx when landing/jumping/grabbing, long pauses in the action during the shoot 'em up level, can't cancel a slide move (by jumping or walking in the opposite direction),