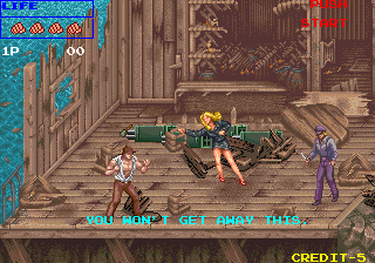 ​​
+
4-player co-op,
pretty fast paced,
can switch character after using a credit,
animal rights theme (fight poachers),
some bizarre over the top elements (a spiked ceiling falls and kills all enemies on screen when continuing (not always though), the bad guys are controlled by a giant caterpillar, some bosses throw cars and even tanks),
ranged weapons, blow enemies to pieces with the rocket launcher, animals sometimes attack enemies as they run away (shredding them to pieces), many sprites on screen at once, grenades which bounce off of walls and your character (if it hits the chest/head), some large sprites and a multi-jointed final boss, enemies can hit each other with certain attacks, pretty good voice samples and fairly impressive FM music, mini-games (free animals from cages), pits (train roof segment for example), one platforming segment (pretty forgiving), tackles and throws (can only throw enemies who are on their fours), four different characters (very similar though besides their stats), some dialogue during gameplay (RCR style)

+/-
Attack enemies who are down on all fours
no level timers
can hit enemies behind you with the whip
can't hit nor be hit by the animals
can't see boss or enemy HP
no playable female chars,

-
Some control issues (can't run, can't jump sideways, need to be able to hit an enemy with a desperation move for it to trigger, sometimes unforgiving hit detection (barrels), )
a bit overwhelming at times in 1-player (the desperation move doesn't block enemy melee combos, can get hit right away after getting up)
pretty cheap final boss
some trial & error (sometimes a screen transition makes it impossible to pick up certain items unless you plan ahead, boss patterns - some can throw objects from off screen)
some objects don't quite follow the screen properly when it scrolls vertically
​some slowdown, no kick button, no block or counter attack moves, no grabs, a bit short,